LSU vs. Butler: The Preview

Share All sharing options for: LSU vs. Butler: The Preview 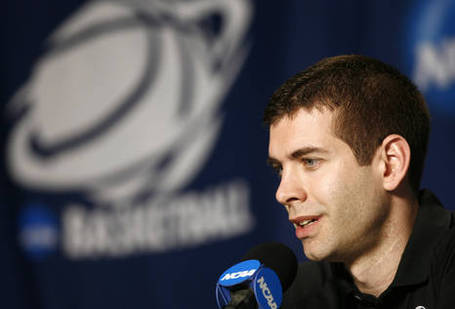 How young is this Butler team?  That guy is their COACH, not a player.  And not an assistant coach.  He's the head coach.

There's still time to get your bracket team in.  There haven't been many entrants so far (I've received two by email along with the ones submitted publicly).  Last year we had about 10 entrants.  This year we only have 5.  Get them in by 11:20 eastern and you are entered.

The more I hear and think about LSU's absurdly early game with Butler, the more I like the matchup.  Butler is a very young team, starting 3 freshman.  They live and die by the 3-point shot (they score over 35% of their points on 3-pointers, compared to 24% for LSU).  They don't have the kind of length that has killed us.

Butler's leading scorer is a 6'8" sophomore forward, Matt Howard.  He's just about the only guy on the team who is not a 3-point threat.  If I'm Trent Johnson, I let Tasmin Mitchell guard him, because he won't be able to muscle Tasmin around, and I let Chris Johnson provide weak-side shot blocking.  Then I also let Johnson's length wreak havoc on their 3-point shooters.

Not only is is Butler a young team, they're also a comparatively small team.  Of their 7 leading minute men, 5 of them are 6'3" or shorter.  No one who is likely to play in this game is taller than 6'8".  That means that we have a big advantage in length.  Chris Johnson could have a pretty big night against a lineup like this.  Tasmin Mitchell could dominate unless their 6'8" freshman swingman scorer Gordon Hayward can hang with him inside.

And if you believe Pat Forde, we have an advantage in quickness as well.  This is the sort of game where Marcus Thornton will be able to get his shots off.  Now he just has to hit them again.

Butler is a half-court team, both offensively and defensively.  For that reason, I think we are going to come out trying to push tempo.  If Bo Spencer has done anything right this year (and he's done a lot of things right), he has done a very good job of pushing the break when the opportunity is there, and of declining to push the break when it's not there.  In this game, he may be called on to push tempo a little more than usual to keep Butler out of its comfort zone.

I would also use our substitution patterns to take advantage of size and quickness.  I could see Chris Bass playing more minutes to keep Bo Spencer fresh to run.  I can see Alex Farrer being used to give us another long perimeter defender.

As a team, we rebound more, get more steals, block more shots, and commit fewer turnovers.  On paper, we seem to have the advantage of experience, size, and quickness.  That's a lot of advantages, but we still have to play well, which we haven't done lately.  We have to play with intensity and we have to play good defense, which we did not do against Mississippi State.

I'm not saying this is an easy game and a sure win.  Far from it.  Frankly, we've played poorly in the last couple weeks.  Whatever our advantages, we can't win if we don't bring our A-game.  There is also the little matter of Butler possibly getting red hot from outside and burying us in an avalanche of 3-pointers.  No matter how well you play defensively, there's a certain amount of luck involved in playing a 3-point-bombing team.  If it's on our side, the game will be easy.  If the luck is with Butler, we don't have a prayer.  If the luck evens out, it all comes down to who plays well.