A Win, A Successful Season, But Not Exactly A Statement That We're Going Anywhere After Saturday

Share All sharing options for: A Win, A Successful Season, But Not Exactly A Statement That We're Going Anywhere After Saturday 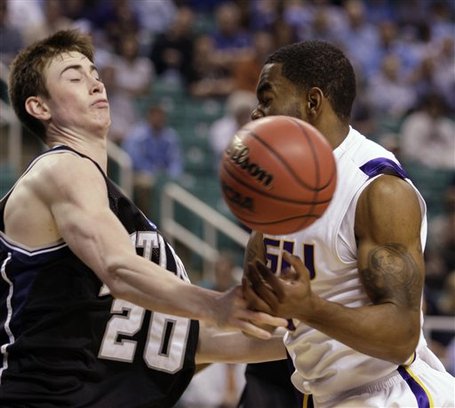 Marcus was back to his old tough-as-nails self, and he hit the big shots, getting 30 to lead us to a win.  It looked like we were heading to a blowout win early, as we jumped out to a 9-0 lead, and led by as much as 13, before Butler rallied to take the lead by 1 point on a couple occasions.

Again, it's a statement to the toughness of this team that they did not give up when things started going poorly, but on the other hand, we let Butler crawl back into the game only because we got lazy on offense and stopped playing interior defense.

I agree with user Mikethetiger when he says,

I think this clinches meeting this year’s (and certainly this tournament’s since Sunday) expectations. Everything now is lagniappe. An upset of UNC and one more week to relish in LSU Basketball would be really nice, but we’ve done what at the beginning of the year we were hoping to do.

This is a team that has:

b.  Made the NCAA Tournament

c.  Won a game in the Tournament

We couldn't have asked for more when the season started, and it's a good thing because I don't think we're getting any more.  This is a team that has had a fine season, but unless we play the game of our lives on Saturday against North Carolina, it's the end of the line for us.

If we have a chance to beat North Carolina, it will be because we play a game with intensity for 40 minutes, we inexplicably develop post defense, we stay out of foul trouble, and we stop taking bad shots.

We should have run away with that game.  We were more athletic, bigger, and we had better shooters.  We only let them back into the game when we stopped playing with intensity and when we started making dumb mistakes, like taking bad shots, committing silly turnovers, or taking bad fouls.

I'm not going to say it's impossible.  I mean, North Carolina lost to Maryland earlier this year, and it's not like they're a great team.  To get it, we'll have to figure out how to stop Tyler Hansbrough, which I don't think we have in us.  I'm not optimistic, you can tell.

But hey, it was a nice win over Butler, and who knows?  Maybe something strange will happen on Saturday.  It will be the best crow I've ever eaten if it happens that way.