Share All sharing options for: Eric Reid Commits on What Was a Boring First Day of the Tournament 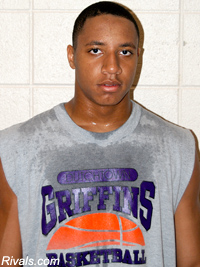 In the NCAA brackets, the only big "upset" was Western Kentucky over Illinois, which hardly even qualifies.  As Poseur said, "If you believe in Illinois, well, it must be lonely."  There were a couple of big almost-upsets as Akron was beating Gonzaga midway through the 2nd half.  Ditto American over Villanova until the Villanova first-teamers finally showed up. A couple 10-seeds took down their 7-seed opponents, but that hardly counts.  VCU made it close with UCLA.  But really, only Western pulled off the upset.  And of course, LSU won.

Amid all that, the football team got some good news.  Safety Eric Reid of Dutchtown High School gave LSU his verbal commitment for the 2010 class.  It's hardly surprising that he will end up at LSU, as he is from about 20 minutes away from Tiger Stadium and his father is an LSU employee in some capacity.

This is a year where the state of Louisiana is producing a good bit of defensive back and wide receiver (or combo "athlete") talent, and Eric Reid fits right in.  He's a very solid prospect, currently sitting at #64 on the Rivals100.  He's a solid 4-star on both major recruiting sites.

To be honest, Reid's highlight reels don't really stand out to me.  Everyone says that he's an outstanding prospect, one of the best safety prospects in the country.  He shows nice ball skills on his highlight reels, but otherwise you don't really see the "he could end up a 5-star when it's all said and done" athleticism that I read about on message boards regarding this kid.  It's entirely possible that his videos don't show the whole story.  Heck, I thought Chris Faulk's videos were terrible last year.  He ended up being a high 4-star and getting into the Army All-America Game, and the coaches were reportedly extremely high on him.  I don't think Reid's videos are terrible.  I just don't see "Top 100 in the Nation" in them.  I see a solid, promising recruit.

The big thing about Reid is that he is the farthest thing in the world from an academic risk.  He's an honor student at Dutchtown High School, and he already has the test score to qualify.  Everyone says he's a great kid and a good leader, a high character guy.

If there is one surprise here, it is how long it took him to commit.  I know it's still March, but a lot of people were saying he'd be LSU's first commitment for the class.  That's how much he held LSU in high regard, and vice versa.  He decided to wait just a little while, until he was free of all lingering doubt.  I have no problem with that.