Share All sharing options for: Spring Preview: The Secondary, Part 1: The Certitude

Previous installments of this series can be found here:

Considering that the LSU football team is starting its 3rd week of Spring Practice, we are now officially stretching the definition of "preview" beyond all recognition.  However, we soldier on because there is much to discuss.

Last year, the safeties (Curtis Taylor and Harry Coleman) were probably the most underperforming group on the defense.  They looked slow, out of position, and generally not up to the level of the competition.  If you believe some of the more vociferous commenters on my post on linebackers, this was all a result of poor scheming and poor coaching, rather than deficient personnel.  I'm not sure I buy it, but in any respect there is going to be a change both in coaching and in personnel.

This is not to suggest by omission that the corners were great.  The entire defense seemed to lack cohesion, especially in the passing game, and while the safeties bore the brunt of the criticism, no one in the secondary from the corners to the safeties to the nickel and dime positions really looked like they were ready to play.

As with the defensive line, the secondary for the 2009 season is a position fraught with uncertainty as to how LSU will use its personnel in the upcoming season.  This is due in part to questions about whether young players have passed veterans on the depth chart.  So while three of the opening day starters in the secondary return to the team this season, none of those three appear to be lead pipe cinch locks to be starters.  It appears, right now, that the only sure starters are two guys who did not get the start against Appalachian State last year: 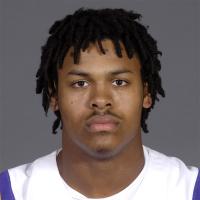 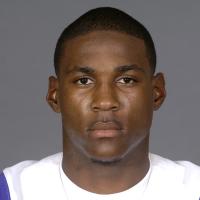 For those of you who don't recognize players without their helmets on, those guys are rising junior safety Chad Jones, and rising sophomore cornerback Patrick Peterson.  The good news is that these two guys are both candidates to emerge as among the best players in the country at each's position.  Both were highly coveted recruits, and both have gotten valuable experience to develop into their potential.

Of all the things that went wrong last year with the defense, the misuse of Chad Jones was perhaps the most difficult to understand.  Jones is a big, highly athletic safety, and the coaching staff of last year thought his physicality made him versatile enough to be a defensive "rover", playing multiple positions depending on the offense going against him, and they shuttled him on and off the field.  This turned out to be more of a liability than anything else, as it was difficult for him to keep up with what he was supposed to be doing.  Even Jones himself gave some insight into the problems he was facing and how they affected the team:

“Oh yeah, I’ve definitely missed a few coverages,” Jones said. “I miss coverages because I’m running on the field, and my back is toward the coaches while they’re giving the play signal. So I’m running on the field not knowing the play. And the play’s about to go on, and I’m asking somebody else what’s the play. And they don’t have time to give me the play, so it gets mixed up.”

Jones's role will be simplified this year, and he should be playing one position on every snap.  Les Miles has said he is most comfortable at free safety, but there may be a hitch in that gitty-up if another player is moved to safety.  As a free safety, Chad Jones would be replacing Curtis Taylor in the lineup.  Taylor was a two-year starter and has finished his eligibility.  If Jones is moved to strong safety, he would be replacing Harry Coleman in the lineup, though Coleman is still around and looking to keep his spot.

The other half of the certain starters among the secondary is cornerback Patrick Peterson.  He arrived in Baton Rouge amid much hoopla last summer.  He was a consensus 5-star, the #1 cornerback prospect in the country, and generally a safe bet to win a starting job by the end of his freshman season.

He did that.  I have to admit I was a bit over-exuberant in my expectations on him, as he did not really come in and set the world on fire, Eric Berry-style, but he sure looked like he has a bright future in football. Says Mr. Peterson of his plans this year?

“This year my goal is to be the best defensive back in the nation,” he said. “I am going to work every day as hard as possible to get there. I am getting faster and more physical, because those are two things I really wanted to build on after I saw everything for the first time last year.”

(subscription required on link).  Well, at least he's got humility on his side.

Peterson was in and out of the lineup last year before finally beating out Jai Eugene for the starting cornerback position late in the year.  He finished with one interception, 41 tackles (some of those on special teams), 3 pass breakups, a quarterback hurry, and a forced fumble.

He played on seemingly every special teams unit, though he was not involved in actually returning kicks or punts.  He blocked on return units and covered on punts and kicks.

If Jones and Peterson emerge as the kinds of players we are hoping they'll be, they will make this secondary one of the strengths of the team.  LSU cannot have success if the secondary struggles like it did last year, but with changes coming both to coaching and personnel, this could be the football equivalent of a hard reboot on the play of the secondary.

I was going to do this preview as a single post covering the entire secondary, but the thing got so long that I'm going to stick with breaking it up into the core players and then go into who is contending to fill out the starting lineup and who will be getting playing time.  Until next time.