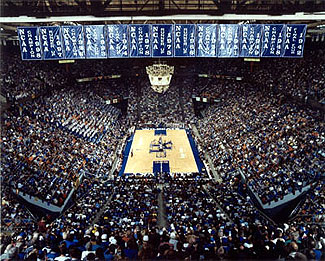 I knew it was hard to win in Rupp Arena.  I had not realized we had not done it since 1989 until Saturday.  Eddie Sutton was the coach of Kentucky at that time, and the team was about to go on probation for what Wikipedia calls, "an extensive scheme of payments to recruits."

Back then, college basketball was essentially the only feeder league for the NBA.  Even the best players usually stayed in college multiple years, and leaving early was considered somewhat unusual.  It seems almost quaint that Michael Jordan stayed two years at North Carolina.  Now, the NBA gets a significant percentage of its players from overseas.  Several more are essentially developed in high school and only serve a probationary year in college basketball.

The two coaches from the 1989 game in Lexington are gone.  Eddie Sutton actually stuck around basketball a long time after the Kentucky debacle, which also seems kind of quaint these days.  How many coaches can preside over an era that puts a storied program on highly restrictive probation and admit to having a huge problem with alcohol and get a job with a good program the very next year?

He finally retired at the end of the 2007-2008 season, which he spent with University of San Francisco.

Back in 1989, college basketball teams had centers.  7-footers with meat on their bones actually stayed in college a little while.  If I had a nickel for every time I heard a fan say, "What our team needs is a true center."  No crap.  90% of the teams in the country lack a true center.  Who was the last true center LSU had?  Jabari Smith?  Jaimie Lloreda?  True centers are a rare and coveted item in college basketball these days.  How many of them are there in the SEC this year?  Are there any? These days a "center" is anyone over 6'7" who weighs over 230#.  Most teams just put their most athletic tall guy at that spot.  LSU's "center" is probably better suited as a particularly tall small forward.

Both LSU and Kentucky basketball have seen a lot of changes since that 1989 season when we were led by Ricky Blanton and Chris JacksonWe had a nice run with Shaquille O'Neal.  Then we had the disaster with the early '90s era when Randy Livingston got so badly hurt, and essentially tore the ligament of the entire team.  There were some truly terrible teams in that era, and in trying to pull out of it we ended up getting put on probation of our own.  John Brady had plenty of faults, but he left the program a lot better than he found it.  In the meantime, we had a fun little Final Four run.

Kentucky had a couple tough years, but quickly returned to prominence again under Rick Pitino and resumed their customary place at the top of the conference.  A national championship run in 1996 and again in 1998 were about par for the course for that program.

Then something happened.  We're not sure exactly what, but the program started slowly declining.  Slowly, but surely.  Granted, during this decline, Kentucky won 3 conference titles during the 2000s, but Kentucky would usually expect a couple more of those in a decade.

Now, despite having great tradition, facilities, and fans, Kentucky is a very average national program.  They were a bubble team last year, and they're a bubble team this year.  And if they lose Jodie Meeks and Patrick Patterson to the NBA (very possible), they might be aiming for the bubble in 2010.  I can't fully explain it, but I don't think it's because the coaching is particularly bad.  Something just changed in the game of baskeball and now the Kentuckys and Indianas of the world aren't having as easy a time of it.

Maybe they'll pull a Bama and grab a coach that excited recruits again.  I don't think Gillespie is that guy, but maybe I'm wrong.