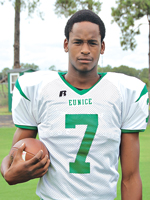 The first commitment of the 2010 LSU recruiting class was WR/DB Tharold Simon of Eunice High School in Eunice, Louisiana.  Simon has not yet been rated by either of the major recruiting services, but I imagine he will be a 4-star when he is evaluated.

There is actually rather extensive video of Tharold Simon out there on the premium sites.  I think he looks pretty darn good, though there is some question of whether he will play offense or defense.  It looks to me like he could play either.

He is listed at 6'4" and 180#, which would suggest wide receiver, but some say he is more suited to corner or safety.  He'd be an awfully tall safety, and a true giant of a corner, but he sure looks like he has the athleticism.

As a receiver, Tharold Simon is a pretty tough kid.  He is not afraid to take a hit.  His videos show him making a few spectacular catches, and show him running away from defenders, and show him dragging defenders with him.  What's not to like?  Of course, I don't know what level of competition he's playing there, but to me he has the goods at receiver.

As a defensive player, he is similarly impressive.  He's a ball-hawker, pulling down interceptions and breaking up passes.  He also knows what to do with the ball when he pulls it down.  He's an aggressive tackler as well.

The knock on him is that he may lack elite speed.  Yeah, I suppose he's not a 4.38 guy, but a lot fewer players have that kind of speed than claim to.  In his film, he's running down little scat backs from behind.  He only gets caught from behind one time, but he muscled his way into the end zone anyway.  I think he's just a long-strider, which makes a person look slower than he is.  And besides, Michael Crabtree lacks elite speed too, and it hasn't seemed to have hurt his college production.

If Simon is a wide receiver or a safety, he will probably have to bulk up without losing any of that speed.  If he's a corner, he probably wants to stay kind of thin.  With any recruit you get at this stage, particularly a long and lean recruit like this one, you expect him to naturally add about 10 pounds or so between now and Signing Day, and another few pounds between Signing Day and the day he reports, due to natural physical development and the beginning of a college level training program.

I am really excited about this kid, and I think he is one of those who may be underrated because he's in the down cycle of the the perception of LSU recruiting.  I think he's the real deal though.  It remains to be seen what his academics look like.  Rumors are he's a risk, but he has plenty of time to work on it.