Share All sharing options for: Tourney Game, Round 4: D'oh! 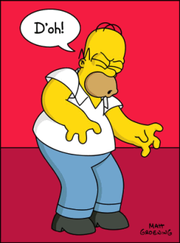 The Elite 8 was supposed to be my moment of triumph.  Instead, while I took the lead in points, I probably lost the game.  Here are the standings:

I'm in the lead by 29 points over Scott and by 43 points over Uberschuck, but I get to spend the rest of the tournament watching their players score points while my players are checking their draft stock or updating their twitter.

Here's the problem:  Uberschuck's two players remaining play each other in the next round.  That means that no matter what happens, he will have 3 games to score the 43 points necessary to pass me.  His players will only have to average 15 points per game to close the gap.  Uberschuck will probably pass me.

Scott might pass me.  He is 29 points behind with one player left on the board.  He probably needs that player to play two games, but if UNC advances past Villanova he's in good shape to win it all.  If UNC beats Villanova and Scottie Reynolds scores less than 14 points, Scott will win if Hansbrough averages 15 points per game.  Scott's a good dark horse.

Everyone else is mathematically eliminated.  Poseur and Jonno are way behind and have no players left, and JPE will match Scott point for point from here out.  Still, even she could pass me if Hansbrough has two monster games.

It was no big surprise that Mizzou lost.  I wasn't really counting on them, but I was hoping either Pitt or Oklahoma or both would make it to the Final Four.  Pitt was so close, but Scottie Reynolds just screwed me.  Oklahoma started off poorly and was never ever to close the gap even after they started playing better.

Even so, I still might win.  I just need Reynolds and Hansbrough to not score a lot of points from here out.  Hansbrough scored only 8 this round, and Reynolds has only averaged 12.5 points per game in the tourney.  It's not like it's impossible for these guys to fail to score 43 points between them.  It's just not that likely.  One of them is going to go off in some game and score 25 or so and make it easy.

So, now it's advantage Uberschuck, and he can twiddle his fingers and mutter, "Excellent."