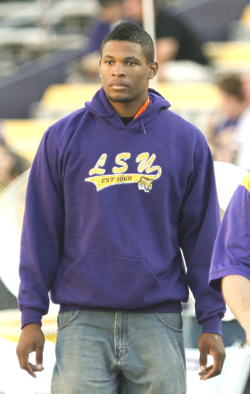 With a picture like this being distributed around, was there ever any doubt?  Nick Jacobs of Many, Louisiana was one of the first in-state prospects offered a scholarship by Les Miles and the Tigers.  There was rarely any doubt about where he would end up.

This will have to be a truncated review, as I just don't know much about Jacobs.  No film of him is available yet.  All I can tell you is that he is a big kid, which you can probably tell just from the picture.  He is listed at 6'5" and 245#, and he looks it in the picture.  If anything, he looks like he could add more weight and be a guard or tackle.

No one has mentioned that possibility yet, and frankly with the numbers we recruit at offensive line and our tendency to convert under-used defensive linemen to OL, it's not something I'd be looking to do with Jacobs.  He looks like a blocking tight end to me, in the MItch Joseph mold, especially with his reported 4.8 speed.  He does not have outstanding receiving numbers, though it is said he played for a running team.  I'll know more when I see film.