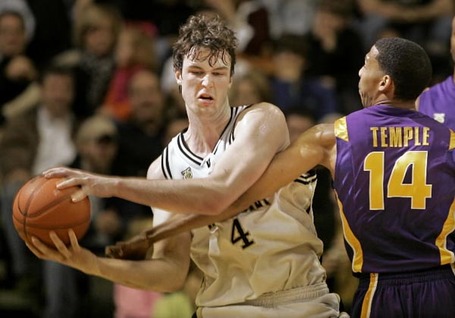 What can you say about Vandy, really?  After starting out the SEC season 1-5, with losses to Kentucky, Mississippi State, Tennessee, Florida, and South Carolina, they're looking a lot better lately.  Since that horrible start, they've gone 5-3, including getting wins over Kentucky and South Carolina in their return matchups.

They have struggled on the road in the SEC, going only 1-6, with their lone win at Auburn's gym.  It's actually easier to explain their slow start and their improvement by noting that the start coincided with having Tennessee and Florida as two of their three home conference games in the month of January.  They lost those two, beat Georgia at home, and lost their road games. It's no big secret how they can be 1-6 on the road and 5-2 at home if you've ever been to Vandy's gym or seen them on television.  Theirs is the only home court in the country where the benches are on the end-line rather than on the sideline.  This puts players and coaches into awkward and unfamiliar circumstances of having to coach from very far away from half of the action.  They did not lose at home in the month of February, but were 0-3 on the road in that time.

The good news for LSU is that this game will be played in Baton Rouge.  The bad news for the Tigers is that Vandy's best player is another of those kinds of players LSU struggles with:  a tall, beefy center with skill.  AJ Ogilvy (pictured above) is listed at 6'11" and 250#, which means he should be able to push Chris Johnson around pretty good.  He scores about 15 per game, which means we can expect him to go for 21 or 22 against us.

His problem is a lack of endurance.  He's averaging only 27 minutes per game on the court.  He also is prone to getting into foul trouble.  He's fouled out once, and ended 6 games with four fouls.  I think to neutralize Ogilvy's strength inside and exploit his problems with fouls and endurance, we should make a point of playing transition basketball when he's in the game.  Make him use a lot of energy and keep him from setting up inside on defense.  Chris Johnson can't push people around, but he can run and he's pretty good in transition.

Vandy's other big scoring threats are their guards.  Jermaine Beal shoots 42% from three-point range.  Brad Tinsley has taken more 3-pointers, but only hits them at a 39% clip.  Both shoot over 80% from the free throw line.  They are a pretty dangerous inside-outside team.  The key, I think, is to try to neutralize Ogilvy by tiring him out and forcing them to be a perimeter team.  I don't think they can hang with us if we do that.

This has been a great season for LSU, obviously, but one thing to keep in mind is that it's not like we're going out there and beating teams by 20 a lot.  We are by no means a dominant team.  We may get a face full of the Vandy team that blew out South Carolina, or we may get the team that lost to Georgia or the one that got blown out by Florida twice by a combined 38 points.  I'd like to get an easy win here, as it would add a least a couple hours to my life.