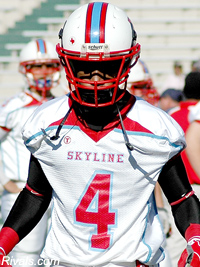 Alright, I'm going to needlessly complain about something, but it's not about the player.  I watched Mike Davis's film on Scout and it is the most poorly conceived recruiting film I've seen yet.  Whoever was filming him apparently wanted to get every player on the field in the shot.  The result is that each player is tiny on the screen and the football is virtually invisible.  To make matters worse, Davis is not highlighted with any graphics, so you only know which player is Davis when the ball is finally thrown to him, which I remind you is not always easy to determine because the ball is virtually invisible.  Heck, with the weird formations and the strange changing jersey colors, it's sometimes hard to tell which team is on offense in his film and which is on defense.  This makes it very hard to actually evaluate Davis in any meaningful way.

To illustrate, on the very first play on his highlights Davis catches a ball in the far back corner of the end zone.  The shot includes the end zone out to about the 35 yard line, and the entire width of the field.  The players are so small on it, you can't even tell which ones are players and which ones are referees.  Davis is the furthest player from the camera and I'm only assuming he actually caught the ball because it's his damn highlight reel.

Another, more petty, annoyance I have with his video is that leaves a lot of pre-snap time in the final reel.  It could have been edited down so it wouldn't take as long without losing any of the "action".  It's just a poorly produced recruiting video all around, with useless material kept in, poor zoom selection, and no way of figuring out who you're supposed to be looking at until the play is halfway over.  The sad thing is, it appears to be shot with a really nice camera with a sharp picture.  It could have been outstanding if only the person wielding it had known what he was doing.

Maybe the videographer wasn't trying to film Davis but was actually the TEAM videographer trying to get film for the team to watch.  I understand that, but maybe someone close to Davis should have arranged for someone to be watching him a little more closely.

Some people are saying Mike Davis is close to 5-star status, but if it shows in his film, I'll never know it.  Maybe the problem here is that Dallas-Skyline High School is one of those teams that is littered with college prospects.  You can't swing a dead cat in the halls of Dallas Skyline without hitting a 4-star in the head with it.

Davis is very highly regarded in recruiting circles.  In both the Texas and Texas A&M lists of the Top 50 players in the state of Texas for the 2010 year, Mike Davis is in the top 5.  The TAMU list has him at #4 overall, behind 3 guys who are probably going to be 5-stars.  He's a pure wide receiver, not looking to play anywhere else.  For a wideout, he is a little undersized at 6'1" and 185#.  He'll definitely add a little bulk, but he won't likely add any more height.

I can't be as effusive in my praise of Mike Davis as I was about Mr. Simon yesterday.  His video just isn't as easily analyzed.  Yes, he looks fast.  Yes, he looks quick.  I'd just like to get a better view of it, and maybe be able to look at how he gets off the snap, which you can't see in his videos because you don't know which one is him until a few seconds later.  Maybe if you watched it ten times and knew exactly where the ball was going each play, you could start to watch him more closely, but I'm not doing that right now.

I wish I had more substance to give you, but I just don't have it.  He has a great offer list, including Oklahoma, Notre Dame, Nebraska, and Cal.  He may be one of those guys we have to worry about going elsewhere, but we thought the same of Russell Shepard last year.  Look how that turned out.  Then again: Janzen Jackson, who everyone thought was safe when he committed to us.

Davis is the first pure wide receiver in a class that will probably see several of them.  If Simon is a wideout, we may be close to finished, with just Trovon Reed being left out there for us.  Or we may shoot for four this year, depending on who is out there for us.  I don't think we'll take a marginal guy just because we need the numbers, unless we lose out on Reed and all the other bigger names out there.