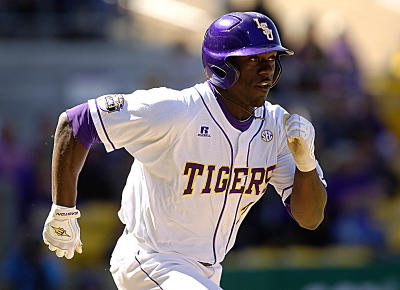 Excellent photo found at LSUSports.net, though it has nothing to do with the game itself.

I managed to listen to the game on local radio here in Tuscaloosa last night, and it struck me that for all of the money Bama athletics brings in, they only have one man doing radio for the baseball games.  He did a good job, but there's a reason that you usually see a two-person team doing radio for a game.  It helps with the flow and helps to fill up dead time.

Anyway, the game was a hoot.  It started out as a pitcher's duel between Anthony Renaudo and Austin Hyatt, with Renaudo leading 2-1 after 6 innings, but then the flood gates opened for both teams when they were able to chase the opposing starters.

Renaudo gave up 2 runs in 6 1/3, recording 6 strikeouts along the way.  He left the game with a 2-run lead, a runner on 3rd base, and one out in the 7th inning, giving way to Paul Bertuccini.  Bertuccini's struggles continued as he walked the first batter and then the second batter to load up the bases for the best hitter in the conference, Kent Matthes.  Matthes hit it deep, but it stayed in the yard, scoring the runner from third and advancing the other runners to second and third base.  Brandon May then crushed a 3-run homer to take a 5-2 lead.

It looked pretty bleak at that point, and Betuccini wasn't out of the inning.  His line at this point was 4 batters faced, 2 walks, 1 long sacrifice fly, and 1 home run.  Jake Smith hit a double, putting another runner in scoring position before Bertuccini was able to get out of the inning.

With LSU down 3 runs heading into the 8th inning, with an opposing pitcher who had just pitched a 1-2-3 inning in the 7th, it looked bad.  Leon Landry led off with a single that the centerfielder somehow misplayed and allowed to roll all the way to the wall.  Landry came all the way around for what was, in essence, a free run to cut the lead to 5-3.  According to the announcer, the Bama defender got a bad break on the ball and then misplayed it once he got there.  Had he made a clean break, it probably would have been an out.  Instead, it was a run.  We had life.

Mikie Mahtook, who would figure big later, and Tyler Hanover both flied out, but then Jared Mitchell reached on an infield single and Ryan Schimpf got a clean single, advancing MItchell who was running on the pitch to third base.

Bama brought in a lefty to pitch to Blake Dean, and Dean hit a perfectly placed nubber between the pitcher and the second baseman and beat the play to first base as the throw was off-target.  On the play, MItchell scored and Schimpf was able to advance to third on the bad throw.  Sometimes it's better to be lucky than good.  Dean was replaced by a pinch runner and soon we had runners at 2nd and 3rd with two out.  Ochinko grounded out to end the threat, but we were back in it.

Nolan Cain pitched the 8th and got out of the inning despite allowing a runner to advance to third base.

Down by one run heading into the 9th inning, Micah Gibbs led off with a double against the 4th Bama pitcher, Nathan Kilcrease, and it looked like we were in business.  Lemahieu grounded out, advancing Gibbs to third and giving us the tying run at 3rd base with 1 out, but Leon Landry was not able to take advantage and struck out swinging.

With two outs, Mikie Mahtook quickly fell behind 0-2 and we were on the verge of losing, but the freshman hit a soft grounder that the shortstop misplayed, allowing Mahtook to reach and Gibbs to score the tying run.  The Bama announcer thought it should have been scored a hit, but it was scored an error.

With Bama having given up the lead, they seemed to deflate.  Hanover walked.  Jared Mitchell then got the game-winning RBI by doubling to left center, scoring both Mahtook and Hanover.  Schimpf got his 4th hit of the night to score Mitchell.  That was the last run of the game for us.

Freshman closer Matty Ott came into the game with a nice cushion.  He gave up a one-out double but never allowed the tying run to come to bat, closing it out with a lazy fly out to Landry in centerfield.

I can't help but think we stole one here.  Dean and Ochinko went a combined 2-for-9 with 2 singles, one of them essentially a swinging bunt single.  Lemahieu also had a quiet night.  Schimpf had an outstanding night at the plate, going 4 for 5 with a home run and two RBI.  Plus, he kept a rally going in the 8th by getting a base hit that eventually led to us scoring our 4th run on Dean's infield hit.

Mahtook figured big, not only getting the game-tying RBI and scoring the game-winning run, but he also threw out a runner at home from right field, saving a run and getting an out at a critical juncture of the game.

Credit also goes to Renaudo who had a very good start.  If you have one complaint about him, though, it's that it takes him an awful lot of pitches to get his outs.  As a result, instead of going into the 8th inning like Bama's starter did, he was only able to get through part of the 7th.  Renaudo was taken out after 102 pitches, and he was pretty much spent.  When your bullpen in struggling like ours is, getting that extra inning from your starter can sure help out.

We go again tonight at 6:00pm.  Austin Ross is expected to get the start, going against a relatively new starter for Alabama in lefty Dell Howell.  We better start warming up our right-handed bats.