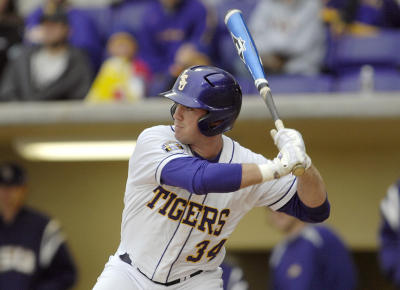 The Tiger bats really came alive against Bama's 3rd starter and its bullpen on Sunday, as the Tigers belted out 19 hits, including 2 homers, 2 doubles, and a triple as the Tigers scored 12 runs.  Blake Dean had another big game and may be rounding back into his 2008 form, as he hit his second home run of the series and recorded 5 RBI on the day.

For my money, the story of this game was Louis Coleman.  I listened to the game on Alabama radio again, and I genuinely thought we were in trouble in the second inning when Coleman struggled with his control and ended up needing about 50 pitches to get his 3 outs.  He only gave up 2 runs and ended the inning with the game tied 2-2, but by that point he had pitched about 60 pitches and had only gotten 6 outs.

Coleman was struggling with his control and was already more than halfway to the 100 pitch plateau and had not just gotten through the second inning.  It looked like we'd be forced to go to our bullpen in the 4th or 5th inning, which would have been disastrous.

After Coleman needed 19 pitches in the 3rd inning and gave up another run, I was sure we would need a big effort from the bullpen, but Coleman kept going.  Sitting at about 80 pitches going into the 4th inning, Coleman finally settled down.  He needed only 10 pitches in a 1-2-3 4th inning.  Then he got through the 5th on 17 pitches.  He was well past 100 pitches, but was pitching the best he had all game.  He got through the 6th inning allowing only one baserunner and then left the game.  He had struggled, but he got through 6 innings allowing only 3 runs.  Bama's starting pitcher was long gone by the time LSU had to go to its bullpen.

In the bottom of the 7th inning, Paul Manieri made a curious but good decision to bring in bullpen ace Matty Ott.  Normally the closer, Manieri decided he needed Ott in the 7th inning.  This was the right decision for several reasons:

I am particularly fond of reason #2 above.  The save is the most useless statistic in baseball in my opinion.  Use your best relief pitcher when you need him most, not arbitrarily designate him for 9th inning work.  In this case, our starting pitcher was spent and Bama's best hitters were coming up in a game in which we had a nice lead, but not an insurmountable lead.  It was the right time to bring in our best relief pitcher.

Ott got through the 7th inning, and then LSU put up a big inning in its half of the 8th, pretty much putting the game away.  Singles by Hanover, Schimpf, Ochinko, Gibbs, and LeMahieu along with a walk to Mitchell put up a 4-spot and LSU brought a 9 run lead to the bottom of the 8th inning.

True to his closer form, Ott started struggling in his second inning of work, loading the bases with a walk and 2 hits before Alabama was able to plate a run on an error.  Still, we got out of the inning with only 1 run against.

If you thought Ott struggled in the 8th, you should have seen the 9th.  Bama started the inning with 2 straight home runs.  Ott got one out before a third Bama homerun of the inning chased Ott.  We finally got to see Daniel Bradshaw do a little pitching, as he came in with 1 out in the 9th and ahead by 5 runs.  He finished out the game with little drama.

LSU won the series, and it seems like all the hitters contributed at least a little over the course of the weekend.  Schimpf had a monster game on Friday night, with Mitchell, Gibbs, and Mahtook also contributing.  On Saturday, it was Dean, Hanover, Lemahieu, Mahtook (again), Schimpf (again), and Landry (again).  Ochinko had a pretty quiet series, getting only 3 hits, but that's not awful.  Mitchell had a terrible game on Saturday but did good things both Friday and Sunday.

The strengths of this team right now are our starting pitchers and our defense.  Hitting should be a strength of this team, and it may yet get there.  We just need the big bats to come alive.  If Dean can build off of his good weekend and if Lemahieu can keep hitting the way he did on Sunday, we'll be getting somewhere.  Mahtook looks like an outstanding player in right field, and Schimpf was a monster this weekend.  Leon Landry needs to start hitting with power again and we'll be an offensive machine.

On another note, we again saw baserunning mistakes on Sunday as LSU gave up two outs on the basepaths after giving up at least one both Friday and Saturday.  Sometimes it was aggressive baserunning, but sometimes it was just a player being careless and getting picked off.  This is the sort of thing that should not be happening nearly this often to a good, reasonably veteran team.

The series win was the 5th straight to start the season, including 3 on the road.  LSU is now in 2nd place in the West and has closed the gap with Arkansas to 1/2 game.  The Hogs' game with Vandy was rained out on Sunday and will not be made up, wreaking havoc on the standings from here to the end of the season.

We have midweek games against UNO and Nicholls State, then we have a home series against Tennessee this weekend.  The Volunteers are the weakest team in the conference so far this season, and anything less than a series sweep would be a disappointment.