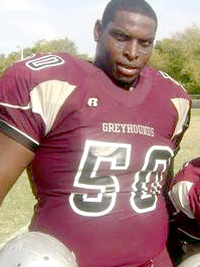 LSU picked up its 7th football commitment for the 2010 class, and it was a bit of a surprise.  JUCO offensive lineman Jamarcus Hardrick picked up an offer from LSU and committed immediately.  Hardrick is a huge kid at 6'7" and 315#.

While LSU has not shied away from JUCO players in the past, it's a little surprising they'd go with a JUCO offensive lineman.  You recruit out of the junior college ranks when you believe you need immediate help.  LSU has recruited a lot of offensive linemen in the last few years and it is surprising that the coaches would think that we would need immediate help there in 2010.

Hardrick anticipates competing for the left tackle position.  Currently, that position is occupied by Ciron Black, who will be leaving before Hardrick arrives.  Last year, Black's primary backup was true freshman Greg Shaw, who will be a junior when Hardrick arrives.  Redshirt freshman Thomas Parsons is also there and will be looking to increase his playing time when Ciron leaves.

With not one but two prospects looking to take over when Black's time is done, why recruit a JUCO kid?  One possible answer I see is that they must not be pleased with where Shaw and Parsons are right now in their development.  Hardrick is being brought in to either push them or take over for them.  The only other explanation that makes any sense is the possibility that Hardrick is just too good of a prospect to pass up.  Phil Loadholt was in that position when he LSU recruited him back in 2006, and he ended up being an outstanding player for Oklahoma.

I can't really watch Hardrick's film and know much about him.  It's always tricky evaluating an offensive lineman, because it's hard for a lay person to judge who is good and who isn't.  The fact that he's a JUCO guy makes it even trickier, because my eye is calibrated to watch high school football players.  The JUCO circuit is a different, tougher competition level.  He looks good on his films, but you can only take so much from that.  Is he quick enough to be a starting left tackle in the SEC?  I can't say.

Hardrick is the first offensive lineman to commit to LSU for the 2010 class, and it has become clear that the coaches are being very selective in who they offer.  Some prospects that fans really liked ended up committing elsewhere without ever receiving an offer from LSU.  Most believe that the OL offers will be distributed at summer camps.  Miles saw fit to give this guy an offer early, however, so he must want him pretty badly.

He was recruited somewhat heavily out of South Panola High School in 2008, eventually signing with Southern Miss after receiving offers from a couple of SEC schools.  He went the JUCO route to work on his academics.  Apparently he has blossomed at Fort Scott Community College in Kansas.  I hope he understands that the SEC has very specific requirements for entry from junior colleges, and he won't be able to sign with LSU unless he takes and passes all the classes he needs.  This is why Phil Loadholt did not go to LSU.

With the Spring Game coming up this Saturday, look for one or two more commitments to the 2010 class.