The LSU Spring Game and the Pittman Family Weekend Activities

Share All sharing options for: The LSU Spring Game and the Pittman Family Weekend Activities 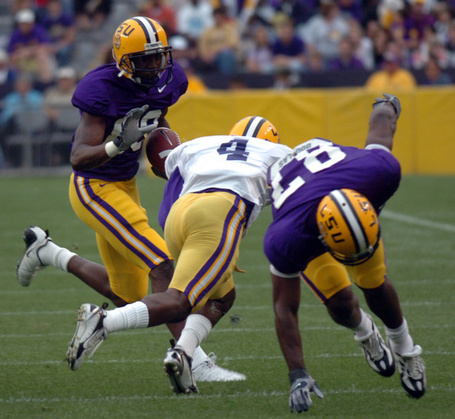 LSU will be holding its semi-traditional Spring Game on Saturday in Tiger Stadium at 5:00pm.  It's semi-traditional because it is not held every single year.  I remember that in one of Miles' early years, he did not hold a Spring Game, choosing instead to use his final practice session as a closed practice.

For better or worse, the 2007 Alabama Crimson Tide changed the way we look at Spring Games.  Now, instead of being a strangely boring scrimmage purely for the diehard fan who just can't stand the 8 months between games, it is instead a program's showcase, designed to get fans excited and to show recruits the excitement around the program.  "You see this?  We get 90,000 in the stands for a scrimmage."

I think you really can point to the 2007 Bama A-Day game as a turning point in that program, even though the 2007 season was pretty much a washout.  The A-Day game, and in particular the monstrous turnout for it, was a springboard to recruiting success that paid immediate dividends in 2008.

But I digress.  LSU's Spring Game (lacking a cool name like "A-Day") will not be televised.  I doubt it will even be filmed for public consumption, though we may get a few pictures out of it.  Like it or not, LSU football under Les Miles operates in pretty restrictive secrecy.  I will not be attending, though like most of you I will be waiting with baited breath to find out how things go.

What will I be doing?  Funny you should ask.  It looks like the Pittman family will be attending the Alabama A-Day game.

WHAT?!  That's right.  It looks like I will be going to the A-Day game here in Tuscaloosa.

How is this possible?  Little Miss ATVS, all of 2 years old now, said one night a week or so ago, "I want to go to the football place and watch football."  Her day care is very near Bryant-Denny Stadium so she sees it every day and sometimes asks about it.  I also think there are some shenanigans being pulled by some of her day care teachers, encouraging this sort of behavior.  After saying she wanted to go to the football and watch football, she added, "Daddy go with me."

I'm an absolute sucker for Little Miss ATVS.  I could not say no to her.  I will probably be going, with the only caveat there being that the A-Day game very closely coincides with nap time, and those of you who are parents know that nap time is sacrosanct.  I'm not sure how we're going to pull this off, but right now the plan is to be in Bryant-Denny Stadium around noon.

In the past, every time I've gone to Bryant-Denny Stadium, LSU has emerged from it victorious.  I think that string will likely end here, as LSU will not be playing.