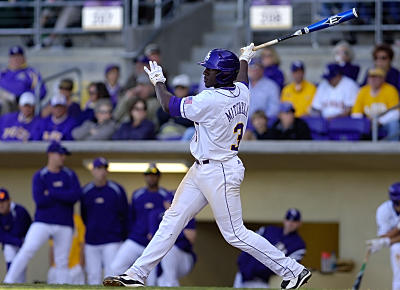 It was pretty much over at the end of the 3rd inning.  In the first, LSU got RBI from Ryan Schimpf, who homered, and DJ Lemahieu, who had a bases-loaded double to put us ahead 3-0.  In the second inning, Jared Mitchell hit a 2-run homerun.  In the third inning, Leon Landry doubled home DJ Lemahieu, who had walked.  Then Jared Mitchell hit a bases-loaded triple that chased Tennessee's starting pitcher and was later brought in by Dean, to put us ahead 10-0.

LSU pitcher Anthony Renaudo cruised through 7 innings, needing to face only 27 batters to get 21 outs.  No Tennessee runner got past 1st base until the 4th inning, when the game was, as described, already pretty much over.  Tennessee used a walk, a base hit, and a home run to score three in the 4th inning.  The Volunteers didn't get another runner past 1st base until Renaudo left after the 7th inning, and didn't get another runner past second base the rest of the game.  Nolan Cain and Jordan Nicholson came on in the 8th and 9th inning respectively to close out the win.

In the meantime, LSU put up one run in their half of the 5th despite Jared Mitchell being caught stealing second base, a rare occurrence indeed.  In the 6th, LSU put up another big inning, powered by 4 singles, an error, and 2 walks.  After that, we started substituting liberally.  We put up 2 more in the 8th, with a walk to Derek Helenihi and a double by pinch hitter Chris McGee, and then groundouts to bring those runners home.

The top of the order did a whole lot of damage for the Tigers, as Mitchell was 2 for 3 with 2 walks, a triple, and a home run for 5 RBI and 3 runs scored.  Ryan Schimpf was also 2 for 3 with two walks and a home run.  Blake Dean was 4 for 4 with a walk and a run scored.  LeMahieu was 2 for 4 with a double and 2 RBI.  Of the LSU starters, only Micah Gibbs did not get a hit, and he was taken out after 4 plate appearances.

So, we got a big win without using up our bullpen.  We go with Louis Coleman tonight, and we'll probably be facing a left-handed starting pitcher.  I would expect some lineup tweaks to avoid so many lefty-lefty matchups.  Game time is at 1:00pm.

In a quick update, it looks like I may be skipping the Bama Spring Game.  Mrs. ATVS's family may be coming into town, and if they do they can escort Little Miss ATVS through Bryant-Denny Stadium and I can sit home and relax.