Share All sharing options for: The New Rock Star Coach 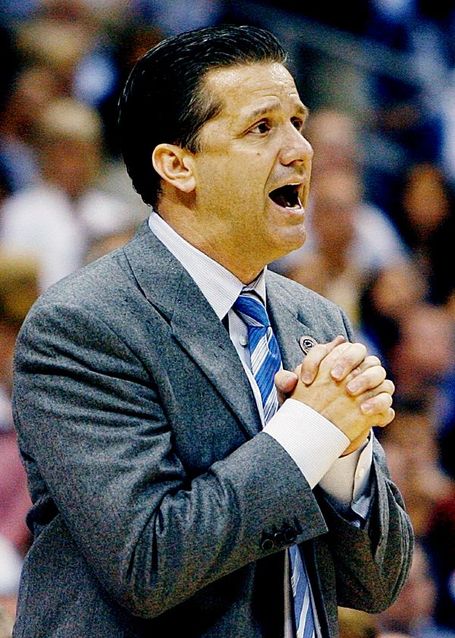 New Kentucky basketball coach John Calipari prays for the annihilation of his enemies.

Kentucky introduced their new rock-star head coach, John Calipari, yesterday at a news conference that was by all accounts a rousing success that won the news cycle.  Even the resident Kentucky basketball fan, Mrs. ATVS, was tremendously pleased by the hire.

I must confess that I believe Calipari will have a lot of success at Kentucky, more than Gillespie had and more than Tubby Smith* had in his last few years.  I believe this for two reasons:

1)  It appears that in hiring John Calipari, Kentucky has also hired half of Memphis's 2009-2010 roster, as many of the members of the 2008 recruiting class are making noise about transferring to Kentucky while members of the 2009 recruiting class may well decommit and follow Calipari to Lexington.  So Kentucky has essentially hired not just a basketball coach, but a basketball team.  A pretty good one at that.

2)  They have positioned John Calipari, a man who has been to as many Final Fours (officially) who has won as many National Championships as John Brady has, as a rock star basketball coaching god.

Here's the formula:  take a coach with an undeniable record of success, and John Calipari certainly has success, pay him a boatload of money whether he's worth it or not, get your fanbase riled up about it, throw a really great press conference, and suddenly the high school sophomores, juniors, and seniors start acting like 19 year old girls at a Poison concert in 1988.  They want to be around the man, the myth, the legend.  They want to see him, to meet him, to be around him.

It becomes very easy to recruit talent in an environment like that.  The beauty of it is that it really doesn't matter if the man you position this way is really that great of a coach or not.  All that matters is the perception.  If people perceive him to be outstanding, the talent he attracts around him will make him outstanding.

Kentucky did not invent this particular formula.  You can probably think of other examples of this in the sports world.

Which is not to say that John Calipari is not a good coach, or that you can plug just any old schlub into this formula.  No matter how hard anyone tried, no one could have made John Brady into a rock star.  He doesn't have it in him. 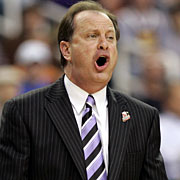 You need a coach with charisma, who is relatively attractive, and who can actually legitimately be sold as an outstanding coach.  Some people can't be sold that way, but some can.

In this respect, John Calipari is an outstanding hire.  He's a good looking man who could sell snow to an eskimo.  While he hasn't won any national championships, he has had very consistent success at Memphis.  And even without the rock star sell job, he managed to recruit like gangbusters, recently having arguably the best talent in the country year to year.  He will win at Kentucky, a lot.  I have no doubt about that.

This is not to say that there is no risk in hiring Calipari.  As Pat Forde observes, John Calipari has always operated in the grey areas of college basketball.  He embraces the sleazier aspects of recruiting, such as by giving family members or associates of big-time recruits jobs in the Memphis program, or by giving scholarships to lesser players who happen to be best friends with major talent.  He also has befriended one of the more shadowy talent brokers in high school basketball, a gentleman who goes by the name "Worldwide Wes" and who reportedly steered a lot of talent to Memphis in exchange for... no one is exactly sure.

At least for now, however, SEC basketball appears to be heading back to its normal state of affairs.  In a short time, if you were betting on who would win the conference or the conference tournament, you will have essentially two choices: bet on Kentucky, or bet on "the field".  No one in the SEC can match Kentucky's dedication and commitment to basketball.  No one else can consistently fill their arena.  No one else can tell potential recruits that they're the best show in town.

The next couple years will see Kentucky ascendant.