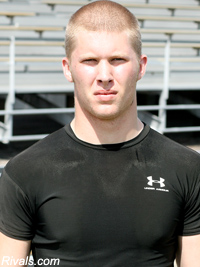 LSU picked up its second linebacker commitment of the 2010 class.  Luke Muncie of Oak High School in Klein, Texas, committed to LSU in the aftermath of Spring Game festivities.  Before his commitment, Muncie was completely unheard-of in LSU recruiting circles.

Why was he unknown?  For starters, it was because he was only offered a scholarship a few days before his commitment.  Second, he has almost no game film available for public consumption.  What film he has is from his sophomore year and it's only a 40-second clip of a handful of plays.

What made LSU sit up and take notice of him?  Hard to say.  He comes from the same geographic area as Russell Shepard and Craig Loston, and says he has played against them a lot.  Perhaps coaches saw him when checking out Shepard and Loston.  Or perhaps Shepard and Loston talked about playing against him.  Maybe they saw him in a camp, or maybe there's extensive film out there that isn't publicly available.  This would explain his offer list.

Muncie is listed as a 3-star, but his offer list suggests something more.  He claims offers from LSU, Ohio State, Michigan, Oklahoma, Arkansas, and others.  That's not a 3-star offer list.  At 6'2" and 215#, he's plenty big enough to play the linebacker position, and may yet grow into a middle linebacker.  He also has outstanding size and athleticism as he reportedly runs the 100 in track and does the high jump and the broad jump.  This would suggest that he has speed as well as the fast-twitch explosive muscle development that gives one the potential to be a very good player at the next level.  ESPN thinks highly enough of him to invite him to play in the UnderArmour All-American Game in January.

We may never have heard of this kid until recently, but that's the way recruiting goes.  Some kids come from high schools that take pains to promote a kid or they play in a high profile league, and those players get heavily evaluated by the mainstream recruiting media.  Other kids just fly under the radar, and those players never get much attention from the Rivals and Scouts of the world.

The world of high school football is just too big to know everything that's going on in it, and some players get overlooked.  It looks like Muncie has been one of those players.  We'll see how he looks when some better film of him comes available.