Bobby Bowden Is Getting What He Deserves

Share All sharing options for: Bobby Bowden Is Getting What He Deserves 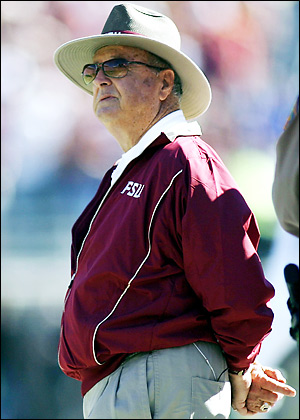 Let's make something clear.  I am not a big fan of Bobby Bowden.  I have thought for a long time that he's run a pretty crooked program at Florida State.  One could go through a long litany of misdeeds committed by Florida State football over the years, but it all can be summed up by one mocking moniker:  Free Shoes University.

I am not a true believer in the misguided notion that athletes must serve as a shining example of purity and goodness in a community (not that anyone will actually say they believe in this, but sometimes they sure sound like they believe it).  I'm a criminal defense attorney and I know quite intimately that good people sometimes make bad decisions.  Even with good people, however, some response to lawlessness is usually appropriate.

Bowden has always looked the other way at his athletes' flouting of the rules until he absolutely, positively, has to do something about it to avoid embarrassing himself, such as when one of his better players does something that makes the normally fawning press sit up and take notice.  Take, for example, Sebastian Janikowski, who was involved in numerous legal troubles while at Florida State, then missed a curfew on the eve of the national championship game (the Sugar Bowl, that year).  With the world watching to see what he would do with his talented but rules-challenged kicker, he did nothing.  He won a lot of games by providing antisocial athletes a safe haven.

Anyway, this latest round of bad behavior by the Florida State program involves literally dozens of football players, as well as athletes in other sports, receiving improper aid in taking a Music Appreciation test.  This improper aid was administered and overseen by actual Florida State athletic department employees, and according to the ESPN article on the subject, went so far as to include a staffer trying to get one athlete to take an exam for another athlete.

When you consider all the aid athletes are actually allowed to receive, and the fact that this Music Appreciation class was probably not among the most intellectually rigorous classes offered by FSU, one can only imagine what other improper assistance was being offered in other, more challenging classes.

As a result, Florida State is faced with many serious consequences.  One of the least serious of these consequences is that the Florida State football program might have to forfeit up to 14 past wins for using players who were technically ineligible.  Says Coach Bobby about this?

The thing about this punishment is that it's not really a punishment at all.  Oklahoma had to forfeit a bunch of wins a couple years ago over the Rhett Bomar situation, yet the world laughed at the sanction, saying it didn't matter one bit.  Heck, the NCAA does not actually award the games to the other team.  They merely say that you cannot count the wins in your own record books or refer to the games as wins in any official publication.  Is anyone associated with Florida State going to think, "That win over Bama in 2007 was actually a loss.  We can't go bragging about it."?  Absolutely not.  Instead of "killing a flea with a hammer", forfeiting wins is actually about the most illusory and meaningless punishment a program can receive.

"This is about all of our coaches and our teams."

He can say that if he wants, but it's patently false.  In a strange twist of fate, this normally farcical sanction actually has a tangible and palpable effect on one person: Bobby Bowden himself.

For those of you living under a rock or completely unfamiliar with the current stories in college football, Bobby Bowden has been (until this) in the thick of a record chase.  He and Joe Paterno are neck-and-neck in a race to see who will finish their careers with the most wins Division 1-A wins.  Both have passed Eddie Robinson's Paul Bryant's previous record and are fighting it out amongst themselves to see who will retire as the all-time college football wins leader.  Until this sanction was handed down, Joe Paterno was ahead by 1.

Now, it appears Joe Paterno will be ahead by about 15, which will probably clinch the title for old Joe.  Bowden would have been forced out a year or two ago if not for this record chase.  As it is, he does very little coaching anymore and is pretty much just a figurehead at FSU.  Even if Penn State takes a serious down turn (not terribly likely), it would take at least two years for Bowden to catch up and probably more than that.  It is very unlikely he'll even stay that long.

Maybe it's not a strange twist of fate.  Maybe it's the most wholely appropriate sanction imaginable.  For a couple decades, FSU has been a bastion of tolerance of lawlessness among athletes.  Bobby Bowden has been the beneficiary of that tolerance, and accumulated a big win total by  encouraging highly talented athletes to come to FSU with promises that, when it came to athletes, the rules were pretty much limited to "anything goes."  Now that the attitude has gone too far by the NCAA's standards, it's appropriate that the man who built his program on accepting bad behavior is the one who is the primary focus of its punishment.

The man sold his soul to the Peter Warricks of the world in order to pile up a bunch of wins.  Now he's having to give just a few of them back and maybe he won't be able to set an all-time record without them.  He still keeps the millions of dollars and he's still going to the Hall of Fame and he will still have buildings and fields and roads dedicated to him. Cry me a river.