Share All sharing options for: Tasmin Mitchell Declares for the NBA but Leaves the Door Open to Return 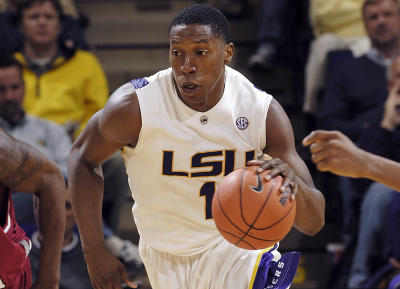 LSU junior forward but all around veteran leader Tasmin Mitchell has put his name into the NBA draft, but is not hiring an agent, which means he can return to LSU for his senior season if he does not like where he's projected to go.  Mitchell has until June 15, 2009 to decide to remove himself from the Draft.

What I know about the NBA could be written on a small pamphlet, probably in the margins of an already-published pamphlet dealing with another topic.  And then I could probably fit in a few small doodles on the pamphlet.

Be that as it may, one of the things that would fit into the margins of that used pamphlet is the fact that the NBA values length and athleticism above all else when it comes to drafting talent.  Mitchell's greatest assets as a player, which are his head for the game, his work ethic, and his nice mid-range jumper, are not considered high priorities at the NBA Draft.

When it comes to the Draft, the team will look at size, arm length, vertical jump, first-step quickness, and things of that nature.  Tasmin Mitchell will not measure up very well in those areas.  He's about 6'6", which would make him shorter than the average NBA player.  He plays below the rim (I don't recall seeing him get a dunk this year).  He does not have great quickness.

If he was about 3 inches taller, he could be a power forward.  If he was a little quicker, he could be a small forward.  As it is, I don't see how the NBA scouts would rate him very highly.  It's a shame for Tasmin because he really is a very good basketball player.  I just think the NBA scouts aren't going to place a high value on the things he does well.  Tasmin's an outstanding college basketball player, and he may yet find a place in the NBA, but he is not going to be the NBA equivalent of the sexy sports car when it comes to the Draft.

Which is all to say that I think Tasmin made a good decision not to hire an agent.  I think that deep down, Tasmin knows he's probably going to end up coming back to LSU, but I think he wants to hear directly from the scouts and the teams that he's not going to be highly valued.

Part of his quickness and verticality problems could be a result of the injury that kept him out of action for the 2007-2008 season.  I remember him as a freshman and he was quicker and more of a leaper back then.  He's developed as a player, but it seems his body may still need to recover from his injury.  If he can get healthier and improve those areas, he could have better luck next year.

Tasmin may not be a highly valued NBA prospect, but he sure is a highly valued Tiger.  We love all the things about him that the NBA scouts devalue.  I don't want to be so selfish as to hope his professional ambitions go unrealized, but I will be pleased if I see him on the court at the PMAC, in uniform, next season.

I am personally of the opinion that Tasmin MItchell would make a good coach one day.