Share All sharing options for: Q&A With David Garrett, Part 1 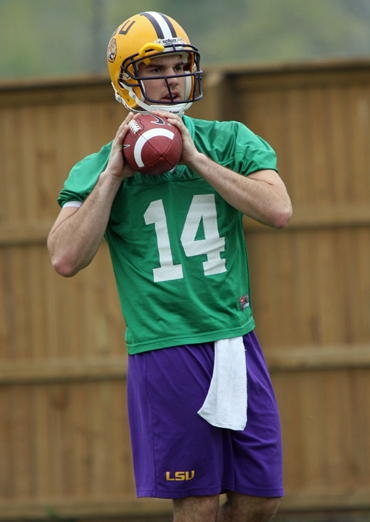 As I explained earlier, some weeks ago I struck up an email conversation with David Garrett, the father of incoming LSU freshman quarterback Chris Garrett.  He ended up reluctantly but graciously agreeing to do a Q&A after I convinced him that I wasn't interested in twisting his words to make him look bad or in trying to trap him into a no-win situation.  I got the distinct impression that Mr. Garrett had one or two bad experiences with the recruiting media during his son's recruitment.

I find myself in the strange position of transition in my life, such that now I identify more with David Garrett than I do with his son.  It's a transition that had been occurring for a few years, but then was cemented when my own child was born.  My child is far from the young adult that Chris Garrett is, but it provided a very interesting perspective on this conversation and Q&A that I had with Mr.  Garrett.  It is plainly obvious that the man is very proud of his son's accomplishments and thinks the world of him.  I do not know what it is like to be an outstanding athlete and I doubt I will ever know what it is like to have a child who garners the kind of media attention that Chris Garrett has gotten, so it is very interesting to put myself in his position and wonder what it must be like.  Without further ado, here is the first half of the Q&A.  My questions are, as always, in bold.

1.  First, just tell us a little about yourself.  Name, where you live, what you do for a living, etc.

2. What can you tell us about the coaching and instruction that Chris got when he was young?

Chris is the middle of three boys, and weighed 11 lbs. when he was born; the doctor who delivered him said, “We’ve got a football player on our hands!”

From age six, he played church basketball, soccer, competitive baseball, and football. Even when he started playing flag football, he played the quarterback position and has never switched. Being big for his age, he “played up” with older guys on his recreational teams, which helped him develop, compete, and improve. Chris was a good center in basketball, a good pitcher in baseball, and a good forward in soccer, but gave all of it up in junior high to concentrate on his first love - football.  His eighth grade team at Tupelo Middle School went undefeated and won the conference championship. Then, Eric Collins, the head football coach at Tupelo High School asked if we’d consider allowing Chris to forego his ninth grade season and move on up to the varsity team to back up the senior quarterback. We were pretty torn on what to do, as we knew he’d play all the time on the ninth grade team, but might not play much as a ninth grader on the varsity team. However, we decided that the experience would be good for him and that he’d learn the system/plays and get a head start in the weight program. So, once spring practice started at the high school, his coach would take him from the middle school out to the high school to practice and train with the varsity. That was probably a little intimidating at first, but he made some great friends and the players welcomed him. And, he ended up playing some during that year. One of the highlights, for sure, was throwing a couple of touchdown passes during our game at South Panola - a perennial powerhouse in Mississippi 5A football; that was quite a feat for a ninth grader and his parents! We have never regretted the decision to skip the ninth grade season and move up to varsity; in the long run, it was very beneficial and we’d do it all over again.

All of our boys were fortunate to be born and raised in Tupelo, one of our state’s most community-minded and progressive cities. And, they’ve had the benefit of being part of what we consider to be Mississippi’s top public school system. Playing 5A football in what is arguably the state’s toughest division has certainly helped to prepare Chris for the future. Along the way, Chris was very blessed to have some great coaches who taught him a lot about football, leadership, and life. Those include Lee Stratton (neighbor, friend and flag football coach), Steve Martinez (Pee Wee tackle league coach), Art Dobbs (Tupelo Middle School coach),  Andy Crotwell (Tupelo High School offensive coordinator and quarterback coach), , and Eric Collins (Tupelo High School head football coach).  As we know, “it takes a village,” and there are so many others whose time and talents have helped Chris develop here in our hometown. He was fortunate to work with a couple of trainers during the summers who helped keep him in shape and prepared for the rigors of football; they are Edwin Crenshaw and Fred Hadley, former athletes who enjoy working with young people.

3. At what point did you figure out that Chris was good enough of an athlete to get attention from big-time programs?

I have learned through the high school football experience and the recruiting process that there are some players and even parents who feel “entitled” and expect all of the attention that comes with it; however, we have been very humbled by the journey. Watching Chris grow up and enjoying seeing him and his brothers play sports, we never even considered that one day he’d have the opportunity to pursue a college education through a football scholarship. That’s just the kind of thing that happens to “other” people! From the time coaches began really noticing him at football camps in the eighth grade, making unofficial offers, saving his jersey number for him, we felt the need to pinch ourselves, as it was a dream come true. That’s probably when we first realized that maybe it was more than just a dream!

4. Were you prepared for the popular attention that Chris and your family received from fans, journalists, and anonymous message board posters? Did you ever conclude that the “business” of recruiting (i.e., the websites) was out of control?

The positive attention was a nice surprise. Genuine interest and support from reporters, fans, and posters is really unexpected but very welcomed. It always makes you feel good to receive well wishes. The negative side of it is what we probably were not prepared for. With only usernames or nicknames identifying themselves, message board posters or newspaper bloggers feel free to examine, criticize, and ridicule athletes in some cases, and sometimes spread information that is not accurate. I learned how folks can misinterpret what is said in an interview and twist comments around to suit themselves. I wish people could remember that these are just kids - each one is someone’s son, grandson, nephew, etc… And when it comes to criticizing on-the-field performance, remembering that these young men don’t make mistakes on purpose and that no one feels worse than they do when it happens. As far as being “out of control,” I do think that the internet has both positive and negative sides. It does enable information transfer with virtually no limits or delays, but it also enables the spread of information that might be inaccurate or personally damaging or hurtful. If everyone would act responsibly and thoughtfully, it would be a very worthwhile tool. And, on a positive note, it has allowed greater exposure for student athletes, which sometimes leads them to a scholarship they might not have otherwise received.

5.  Did you or Chris ever think that he deserved to be ranked higher than he was?

Chris has never mentioned rankings or anything like that. It is something we have never discussed. You have to be confident in yourself  to compete and succeed in anything, and Chris has always taken the approach of using his God-given talents to the best of his ability. He knows what he is capable of, and as all of us have opportunities for improvement, he constantly works on any areas that need to be addressed. The rankings, I believe, are opinions and they vary greatly. Sometimes I think they are affected by certain agendas, biases, politics, etc… And, sometimes they are based strictly on a scout seeing one performance without evaluating a body of work. Many lower-ranked athletes have gone on to surpass those with higher rankings, so it’s not something to get caught up in. Any parent would want their child to receive the highest rankings, but in the end, those things don’t matter.

That concludes part 1.  I will publish part 2 tomorrow unless something dramatic happens.