Share All sharing options for: Justin Hunter Commits to LSU 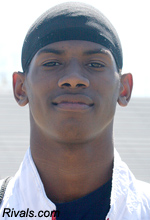 LSU received another commitment over the weekend, the 9th for the 2010 class.  This one comes from a very unusual place:  Virginia Beach, Virginia.  I do not recall the last time LSU signed a player from Virginia, Maryland, North Carolina, Delaware, or Pennsylvania.  It's probably happened, but I don't remember it.

Justin Hunter, wide receiver, 6'4" 175#, 4.5 second 40, 40" vertical leap, is a very interesting athlete.  He's listed as a 4-star on Rivals and a 3-star on Scout for now but Scout has no film on him.  He clearly has the length you like to see in a receiver, and his speed is very good.  What really stands out is his leap.  He is supposed to be a college-track-and-field class high jumper who recently jumped 7'2".

It doesn't take a lot of imagination to figure out that he could be a dangerous target for fades and jump balls.  Obviously, with the speed and the leaping ability, he has rare raw athleticism.  We do not however know the answer to the ancient question:  Is he a track athlete playing football or a football player running track?  Such is the key difference between a great athlete who becomes a decent player (Bennie Brazell) and a great athlete who becomes a great player (Deion Sanders).

There is junior level film of Mr. Hunter available.  It looks solid.  His high school definitely liked to use his leaping ability as he is constantly shown skying over defenders to go after lobbed passes.  You don't really see the polish with Hunter that you see with, for example, Rueben Randle but that's hardly surprising.  No incoming freshman receiver at LSU has shown Randle's polish in years.  You don't see him displaying the toughness or physicality that will be necessary to excel in the SEC.  I'm not saying it's not there.  I'm just saying that if Hunter has it, it does not show in his junior year highlight film.

I think Hunter's ceiling is high but I can't say I know enough about him to tell you if he's going to be an outstanding player or not.  Honestly, I haven't seen a junior film from a receiver this year that I have thought was better than Tharold Simon's, and Hunter's is not an exception.  He definitely has the athleticism to succeed, and the LSU coaches thought highly enough of him to go outside of their traditional recruiting areas to take a shot at him.  He seems like the kind of kid that Virginia Tech has thrived on for years:  a good athlete without the media accolades of some of the athletes from more traditional SEC territories and who probably needs a bit more coaching than some top prospects.  His offer list is outstanding, as he has gotten the attention of Alabama, Clemson, Florida, Penn State, Ohio State, and Tennessee among others.

With Texas's Mike Davis, Louisiana's Tharold Simon, and now Virginia's Justin Hunter as commitments, it will be interesting to see what happens with LSU wide receiver recruiting.  Clearly we are going to go hard after Thibodaux's Trovon Reed, a highly regarded recruit and maybe the #1 guy in Louisiana this year, but will we go after more?  Are we going to sign 5 wide receivers?  We have to be at least a little worried that either Davis or Hunter may not make it all the way to signing day, as they are not Louisiana kids and they seem to have pulled the trigger pretty quickly.  Simon may end up on defense.  I will be reading some tea leaves on LSU wide receiver recruiting in the future, as LSU's intentions from here out will tell us how confident they are in Davis and Hunter sticking with LSU and/or where they see Tharold Simon playing.