Share All sharing options for: Some Former Assistant Coach Says Jordan Jefferson The 3rd Best QB In the SEC 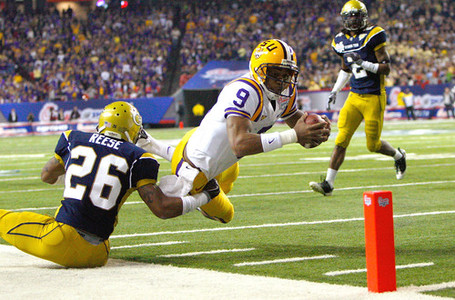 A coach by the name of Pete Cordelli, who has apparently worked just about everywhere at some point in his career, has put together his list of the three best quarterbacks in the SEC.  LSU quarterback Jordan Jefferson made that list.

OK, we have to face facts that there is no way that Jordan Jefferson will be considered the #1 or #2 quarterback in the league before the 2009 season starts, not with Tim Tebow toting around a Heisman and a BCS trophy, and not with Jevan Snead having already emerged as an outstanding QB.

Third place, though?  It's defensible.  Let's take a look at the competition:

Arkansas:  Ryan Mallett, sophomore.  Actually, he wouldn't be a bad pick for the #3 spot, given the experience he gained at Michigan before transferring.

Auburn:  Kodi Burns, junior, maybe.  Auburn's QB problems last year were well-documented.  Actually, I don't really think their problems were Burns's fault, but the confidence can't be there.  Do people improve?  Yes, but it's hard to count on dramatic improvements.

Georgia:  Joe Cox, 5th year senior.  Well, let's face facts.  There was a reason he was beaten out by a true freshman a few years ago.  Could end up being a fine, mature QB this year, but he's kind of limited.

Mississippi State:  Tyson Lee, senior.  I had to look up his name.  His stats were spotty last year as a part-time starter.  He had a decent completion percentage, but averaged less than 6 yards per attempt, was sacked 25 times, and threw almost as many interceptions as touchdown passes.  Plus, he's not really a threat to run.

South Carolina:  Stephen Garcia, sophomore.  He showed flashes last year, but he had a hard time getting the ball to the end zone.  He ran and threw for a total of 8 touchdowns while throwing 8 interceptions.  Plus, you have to wonder about his stability off the field.

Kentucky:  Mike Hartline or Randall Cobb, sophomores.  Cobb's an outstanding athlete.  Hartline was the "steadier" option last year, but he threw for a paltry 5.4 yards per attempt and threw almost as many interceptions as touchdown passes.  Cobb makes things happen, but still has a lot to prove.

Tennessee:  whoever can walk and chew gum at the same time.

Meanwhile, Jordan Jefferson, as a true freshman, did OK.  He did not quite complete 50% of his passes, but he protected the ball, and was a terrific runner.  His last game of the season was very good, completing well over 50% of his passes without an interception.

There are a lot of inexperienced QBs on the list, including Jefferson.  And while we can anticipate Stephen Garcia, Kodi Burns, and Ryan Mallett to get better, I think the case can be made that Jefferson's the one most poised to break out.

Coach Cordelli did not just rank the top three quarterbacks.  He broke down their attributes and their skills into individual rankings.  Needless to say, Tim Tebow possessed the greatest physical attributes among the three, but he ranked Jefferson very close to Snead.  Only in Strength, Physical Toughness, and Consistency was Snead considered superior.  In Speed and Agility, Cordelli gave Jefferson the edge.  I think that's very defensible, and I think it's fair to say that time and effort could improve Jordan's Strength, Physical Toughness, and Consistency.

He also broke down the skills, such as Passing Technique, Timing, etc.  In these types of skills, one would expect a relatively inexperienced quarterback to really be at a disadvantage, and the ratings reflect that.  Even so, the differences between how Coach Cordelli sees Jefferson and how he sees Snead aren't all that great.

Of course, all of this is subject to substantial revision once the season actually starts, but it's good to see young Mr. Jefferson getting accolades.