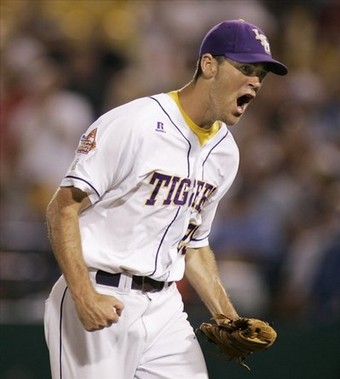 Louis Coleman's outstanding 8+ innings of work nullified an excellent performance by South Carolina's crafty lefthander Nolan Belcher.  Coleman faced on 3 more than the minimum number of batters through 8 innings, before giving up a couple hits to begin the 9th and giving way to the bullpen, which loaded the bases with no outs before Matty Ott closed the door with two strikeouts to end the threat.

Coleman was helped by a couple of nice double plays turned by Nola and Lemahieu behind him, along with some nice outfield play on what was a very windy, blustery night under difficult conditions to catch fly balls.

Once again, LSU struggled against left-handed pitching, as the Gamecocks threw 3 different lefties against us, all of whom were at least somewhat effective.  Belcher went 6 innings and was matching Coleman almost batter for batter through 5 before giving up 2 runs on three hits in the 6th inning and giving way to bullpen in the 7th.

Through five innings, the Tigers had only managed two hits, both of them infield singles by Mikie Mahtook.  Belcher kept the rest of the lineup off balance with a variety of offspeed pitches.  Through 5 innings, he faced only 4 more than the minimum number of batters as he walked a batter and hit another together with the two hits he'd given up, but he ran into trouble in the 6th when Dean, hitting against a rightward shift, slapped a pitch on the outer part of the plate through the open left side of the infield.  Then Micah Gibbs laced a double into the right field gap to drive home Dean.  Gibbs advanced to 3rd on a wild pitch and Mahtook singled through a drawn-in infield.

Gibbs' double was the only extra-base hit of the night for the Tigers.  After Belcher left the game, LSU put up two more runs in the 8th on a 2-base error that allowed Lemahieu to reach with no one out.  Schimpf and Dean then walked to load the bases and Lemahieu scored on another wild pitch.  Gibbs struck out and Mahtook hit another grounder (his 4th of the night, but the first not to result in a hit) that resulted in Schimpf being tagged out in a close play at the plate.  With runners on the corners, Ochinko came through with a base hit to drive in Dean.  Mitchell ended the threat with a strikeout.

The first cracks in Coleman's armor appeared in the 8th inning, as a little-used pinch hitter who had been hitting .105 hit a solo home run to cut LSU's lead to 4-1.  After a quiet top half of the 9th, South Carolina got things going in the bottom half with two straight singles.  Chad Jones was brought in (either one batter too late, or entirely unwisely at all, depending on how you look at it) and walked the only batter he faced to load the bases.  Ott came in to close and had filthy stuff, striking out two and inducing a soft liner.

LSU advances to play Georgia at 1:30pm.  The bad news is that Georgia has plenty of lefthanded pitching left, as we will probably see Alex Mcree in Game 1.  if we make it to Game 2, we will face either Jason Leaver or Chase Hawkins or both.  All three of those pitchers are lefties.  All have ERAs of 4.76 or higher, but that seems to matter little.  Along with lefty reliever Justin Earles, these 4 pitchers can probably put together two entire games, so we have our work cut out for us if Georgia decides (as they should) to load us up on lefties.

I really think that, with the exception of our inability to hit lefties, this team is really rounding into shape.  Our bullpen has solidified in recent weeks.  Austin Ross has put together a nice last couple of outings.  We crush right handed pitching.  We play good defense.  We get reliable greatness from Ranaudo and Coleman and now we're getting solid pitching from the other parts of the rotation and the bullpen.  It's disheartening that we struggle so much to hit left-handed pitching.  Well,we'll get more practice at it today.