Share All sharing options for: A Look At Some of the Best Players in the Baton Rouge Regional

I'll leave it to Poseur to break down the regional in detail for you.  I just want to let you get to know some of the best players that will be coming to Baton Rouge for this regional.

This is Minnesota right-handed pitcher Tom Buske, who will probably be starting in Minnesota's first game, against Baylor.  Opponents are hitting .220 against him over 88.1 innings.  He has recorded 71 strikeouts to 23 walks, and has given up only 6 home runs on the year.  He's  a very solid pitcher who will give Minnesota every chance to win the game in which he pitches.

Minnesota's right handed closer Scott Matyas is allowing opposing batters to hit only .196 against him.   He has 14 saves in 21 appearances and will often go more than 1 inning in relief.  His strikeout to walk ratio is almost 6:1, which is staggering. 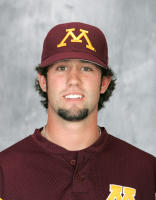 Middle infielder Derek McCallum has the best hitting statistics in the regional.  His line is .404/.737/.482, which is beyond outstanding.  In contrast, LSU's best hitter over the course of the season was Ryan Schimpf, whose line was .324/.626/.439, which isn't bad at all, but it's 80 points behind in batting average, 111 points behind in slugging percentage, and 43 points behind in OBP.  Those aren't small differences.  He hits lefty, and he's dangerous, with 17 home runs on the season.

Baylor really lacks a lot of top end talent, especially in the pitching department.  They don't have a single pitcher who has pitched more than 17 innings with an ERA below 4.5.  They don't have a Derek McCallum, but they have some nice hitters.  The best is infielder Shaver Hansen, a switch hitting run-producing machine whose line is .333/.633/.393.  He leads Baylor in home runs, RBI, and runs scored. If he has a weakness, it's that he strikes out a good bit and doesn't walk a whole lot.

Dustin Dickerson is another infielder for Baylor who is also an offensive leader.  He leads the team in batting average with a line of .381/.595/.437.  He doesn't strike out very often, only about once every 9 at bats compared to once every 4 at bats for Shaver.

We could end up seeing a good bit of Aaron Miller.  He's probably Baylor's 3rd best hitter with a line of .328/.581/.430, which is pretty darn good, but he's also Baylor's best left-handed pitcher.  Opponents are hitting .258 against him in 47.2 innings and he has an ERA of 5.48.  He's started 6 games and appeared in relief in 6 games.  I would imagine that if we ever play Baylor in this regional, we will be going against Aaron Miller.

No pictures appear to be available of Southern players, so we moved along without them.  Jarrett Maloy is Southern's best pitcher with a 3.14 ERA in 66 innings pitched.  Oopponents are hitting .364 against him.  If Southern decides to use a lefty instead of Maloy, we'll probably see Chase Richard, whose numbers aren't nearly as good, but who is a lefty and has started a lot of games for the Jags.

Southern's best hitter is Brad McDavid, whose line is .358/.642/.447.  Southern actually has 4 hitters with slugging percentages of greater than .600 in greater than 100 at bats.  Their cumulative stats are a little skewed because they don't play as many games as LSU does, and it's hard to tell how the competition level compares, but at their level they can hit really well.