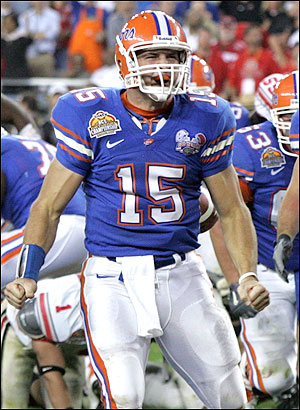 There's a word you hear thrown around a lot when talk comes to football, and practice, and coaches, and Spring.  The word is "leadership".  The word means whatever the speaker thinks it means.  Either that or it means nothing.

Actually, I shouldn't single out football for the criticism of overusing and misusing the word "leadership".  The corporate world does it too.  I recall a job interview I went on when I was younger, a lot more naive, and significantly less able to embellish than I am now.  The interviewer asked me to describe how I've shown "leadership".  The question truly perplexed me.

I wasn't sure what he meant.  I don't think I could have put it into these words at the time because I didn't have the vocabulary, but I have always possessed an instinct that "leadership" (by which is meant the ability to get others to do what you wanted them to do) was value-neutral at best, and downright sinister at worst.  Did he want me to tell him stories of ordering people around and getting them to do what I told them?  Would that be impressive to him?  The thought made me uncomfortable, and I'm sure that whatever I told him in response killed any chance I had to get the job.

What I eventually figured out was that interviewers and others who used the term "leadership" as a universally positive thing weren't really talking about leadership at all.  They were using "leadership" as an amorphous term that meant any positive character trait or behavioral trait one could imagine.

To illustrate my meaning, first we will have to list some inherent qualities of "leadership" as the term really means:

Which brings me to how I hear the term used in reference to football.  Usually, when I hear the word "leadership" in reference to football, it has no determinable meaning whatsoever.  It's just a placeholder.  "The team showed great leadership out there," or, "All of our players are remarkable leaders."  The first statement is meaningless.  The second is impossible if leadership means what it's supposed to mean.

Just as an example, and not to single out Nick Saban in any way because lots of people are guilty of just this sort of misuse or useless use:

If you look around hard enough, you'll see that even I have succumbed to the lazy cliche of using leadership to mean..  whatever:

I heard the announcers say something that could not possibly be more troubling if you're a Tennessee fan.  The announcer said that Phil Fulmer had told them that his team lacks leadership, and that all the energy of the team comes from the staff rather than the players.  I honestly do not believe I have ever heard of a coach saying such a negative thing about his team.

What he's saying is that his team lacks character, and that they don't try.  Their seniors and other veterans have failed.  He's also telling stories on himself, because unlike Nick Saban at Alabama last year, another team that lacked leadership, this it he team Phillip Fulmer built himself.  If the veteran players lack leadership qualities, it's because he either recruited the wrong players or he trained them not to be leaders.

That's just awful.  There's an air of negativity around this team now, and it does not appear to be limited to the team.  The fans are negative; the crowd is negative; the press is negative.  In fact, it's hard to say what came first, the team negativity or the fan negativity.  But when fans are filing out of the game in the first half, something is desperately wrong there.

I think if I was Phillip Fulmer, I would try to identify the sources of the negativity within the team, the veterans who are not leaders, and I would separate them from the team.  Even if they're your best players.  Get them out.  Go with younger players the rest of the way, even if you have to lose a lot more games.  I can guarantee that if the problems are as bad as they're made out to be, you're going to lose more games anyway.  You'll lose to Georgia, Auburn, and Alabama, and you may lose to South Carolina and Vandy as well, if you can't correct your effort and leadership problem.

At least I acknowledged it was more about effort and character in general than about actual "leadership", but I confess the error.

I was watching the Army-Navy game last year.  You can imagine that's a game where the word "leadership" would get thrown around a lot.  It was.  I heard the announcers say, (and I don't have exact quotes to use), "These players are all great leaders," and I also heard them relate that the coaches had said, "You tell these guys to do something, and they do it, the first time.  That's leadership."

The first quote is not possible, because not everyone can lead.  Someone must follow.  The second quote, as admirable a quality as it may be in football players or soldiers, is more a description of followership than of leadership.  Misuse like this is common, but rarely seen as starkly as it was in this case.

Which brings me to what I think is really a good quality in a football player.  A good football player does what he's told by those above him, does it promptly, does it faithfully, and does it enthusiastically.  It's also a good quality in an employee.  Whatever you might want to call that quality, it is the opposite of leadership.  It's an ability to follow the leadership of others, and I suppose an ability to choose your leaders with care and for maximum benefit.

So I suggest a rule banishing the use of the word "leadership".  Or, if we must use it, let's at least use it correctly.  And let us also acknowledge that it is pretty rare that we'll have occasion to use the word in its original meaning.