Share All sharing options for: Daniel Hood Should Play 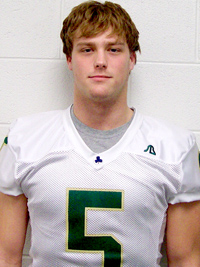 By now you may have heard about the terrible case of Tennessee signee Daniel Hood.  For those of you slow in catching up to this story, Tennessee has signed a defensive end/tight end who, when he was 13 years old, committed an act the details of which are literally unspeakable on this blog.  The basic facts are that he and an older teenager committed a brutal sexual assault upon Daniel's then-14-year-old female cousin.  It involved the use of a foreign object.

This has come to light recently, and the firestorm is only beginning.

There are some facts here that I am taking as given, because they appear to be documented elsewhere:

If any of these alleged facts are ever shown to be untrue or questionable, I certainly reserve the right to review the opinion I form on their basis.  I don't know if this will be a popular opinion or not, but I will go on record as saying that given the above facts, Daniel Hood should be allowed to play and should do so with our blessing.

To really get at this issue, I think we need to analyze a number of different issues, interrelated but not identical.

I think the answers to these questions lead me to say that Daniel Hood should be allowed to play.  Let me take them one at a time:

What does it mean to commit a terrible act when you are thirteen years old?

The conclusion I draw that Daniel Hood should play is not something I arrive at lightly.  I am informed (perhaps biased) by my work as a juvenile defense attorney here in Alabama.  It's a job I think is worthwhile and that I take seriously.  In simple terms, my opinion about Daniel Hood comes down to a simple declarative statement:  Thirteen year old children are different.

This is not to say that people get a pass for what they did when they were children.  Far from it.  There must be consequences for bad behavior, whether it is by an adult or by a 2-year-old. However, I think every thirteen year old should have the opportunity to earn his way back into civilized society.  The key word there is "earn."  It cannot be given to the person.  Not all kids who mess up dramatically ever will earn their way back.  If you believe the published reports, Daniel has earned his way back.

When you get down to it, our juvenile justice system is designed around the belief that children are different and therefore they should be treated differently.  Most juvenile cases you handle as an attorney are not nearly as dramatic or serious as this one, but whenever I represent a child who has done something particularly awful, I try to tell him, "You have done something very wrong, and you will suffer serious consequences, but you should learn from it.  If you learn from this, you will be affected by this act, but you will not be defined by it.  You will be defined by what you do with your life next."

We are not defined by the worst thing we did when we were children.  We are defined by how we responded to the worst thing we did.  Some of us make amends for our wrongs, and some of us embrace our inner demons.  In Daniel Hood's case, it is impossible to "make amends", but that does not mean we must wallow in debauchery.  Some of us choose to explore the darkness we experimented with, and some of us choose to back away from it.  Daniel Hood apparently has chosen to back away from it.  The six years that elapsed from this act define him, not the act itself.

I will freely admit that it would be very difficult to say this if a loved-one of mine was the victim.  I would hope I'd have the strength to say that the 19 year old kid he is now is not the same person as the 13 year old kid who did the despicable act, but I freely acknowledge that may not be possible

Should our athletes be required to be role models?

I believe I am an intelligent person, and I have chosen to commit myself to distributing my thoughts on sports here at this page, but I am not egotistical enough to tell you that I have thought about all of the issues or that I have any kind of a monopoly on wisdom.  With that in mind, let me confess that despite this issue of athletes as role models coming up every so often in media matters, I have never really given it serious thought until I heard about this story.

After careful consideration, I tentatively conclude that our athletes should be required to be role models.  I say this because the pursuit of athletics as a vocation or as an avocation is necessarily also a pursuit of fame and adoration from the public. You cannot seek the adoration of the public and then ignore the impact that adoration has.

Playing sports at the major college or the professional level is not like working on an assembly line, nor is it like shooting 3-pointers in your driveway.  Those who seek the kind of life Daniel Hood is seeking are also seeking out attention and notoriety.  You need not get to the professional level to find your fame, as many an athlete who topped out at the college level has achieved fame.  What's more, fame is what you are seeking when you play at this level.

With fame comes responsibility.  If one is going to seek the admiration of others, and seek the professional salary that comes from ticket and merchandise sales and television advertising related to viewership, then one's personal life is as much a part of that admiration as one's athletic ability.  The NFL and the NBA will tolerate a certain amount of bad behavior, but there comes a point where either of those leagues will jettison a capable athlete because his bad reputation becomes bad for business.  Not only is it bad for business, but there's a certain moral implication in seeking the attention of children and then failing to be a positive role model for them.

It's a cop-out to accept the fame, the money, and the adoration, and then turn around say that you are only an athlete and not a role model.  If you seek this sort of limelight, you are a role model whether you want to be or not.  It's just a question of what kind of role model you will be.

This brings us to the last question:

Can a young person like Daniel Hood be a positive role model?

This I think might ultimately be the most important question of the group.  My answer, and you are free to disagree with me, is that Daniel Hood can potentially be a good role model for the children whose admiration he seeks.

I disagree with those I heard on the radio decry Daniel Hood's capacity to be a good role model.  I heard statements like, "Will this make our children think they can do horrible things and still achieve fame and fortune?"  (paraphrasing).  I don't really think so, because I think Daniel Hood's example can be emulated with respect to how he has responded to his own errors in judgment.

I think this comes from another basic principle to which I subscribe:  being a role model does not mean never making mistakes.  Let's contrast Daniel Hood to a certain well-known Golden Boy: 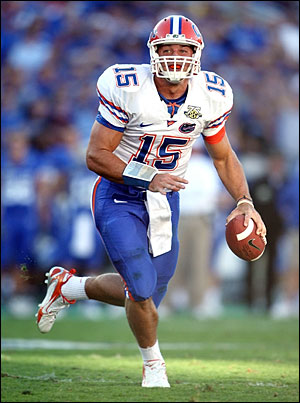 Tim Tebow has probably never even thought about doing anything wrong, and that's great for him.  I congratulate him for being, by all accounts, an outstanding person.  He goes on mission trips to help out the poorest people in some of the poorest countries.  He's a good student.  He's respectful.  He works very hard to be the best at what he does.  Etc. Etc.

One can wonder what he was thinking in hooking his wagon to a slimeball like Urban Meyer, but that's not really a topic for this article.

I don't think small children should be told the details of what Daniel Hood did.  I don't think any 8 year old is (or maybe should be?) ready to hear this sort of thing.  But as kids get older, it can be very useful to have a person like Daniel Hood around to say that anyone can change.  Anyone can be a different person, but they have to work very hard at it.

My answers to these questions tell me that Daniel Hood should play.  Feel free to disagree with me.