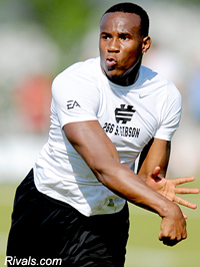 In one of the the prime all-time examples that recruiting services don't know everything about what goes on with coach's recruiting board, yesterday LSU received a commitment from Prattville, Alabama quarterback/defensive back Sam Gibson.  I doubt anyone associated with the private LSU media (myself included) had ever mentioned his name once in connection with LSU recruiting.

Not that he isn't good.  He is a 3-star "athlete" with a good football build for either position.  He is listed at 6'2" and 200# and may well be getting bigger.  He claims 4.4 speed in the 40 yard dash, and his videos definitely show speed.  He is the starting quarterback for the Alabama state champion and perennial powerhouse program, Prattville High School, a team that runs a spread option.

He is by all accounts a very heady player.  He lists offers from Vanderbilt and Stanford, among others, so he's clearly far from an academic risk.  As a defensive back, it is hard to gauge him, because there is no film of him playing defensive back.  There is film of him throwing and film of him scrambling for yards.  He came to the LSU camp this week and played some defensive back.  Apparently Ron Cooper and John Chavis liked a lot of what they saw in him and offered.  Despite living in Bama country, he committed to LSU on the spot.  One can imagine that with his natural head for the game (you have to have a great head for the game to be a state championship-winning quarterback for a spread option team), he would compare favorably to a guy like Rashad Johnson, former Bama safety, who actually started his college football career as a walk-on.

There is some contradictory information about who has offered him.  He does not list an offer from either Alabama or Auburn on his offer list, but his high school coach claims he had offers from both and just really wanted to go to LSU instead.  Other sources say that both Bama and Auburn really wanted to get a closer look at him and are disappointed to have lost him.  Gibson is apparently a bit of an Alabama anachronism in that he really favors LSU and knew all along that if LSU offered, he would jump on it.  I don't have an explanation for it, and I wouldn't start looking for a trend there.  Prattville is not Mobile.  It is nestles smack between Auburn and Bama and is not remotely an area that favors LSU.  I think a lot of LSU fans will be fans of Prattville High School this year though.

One thing this commitment does is it frees us up to pursue a quarterback by the name of Zach Lee out of Texas.  Lee is a solid prep quarterback prospect, but he is also a good enough baseball player that he will probably end up being drafted in the 2010 MLB Draft.  He is considered a risk for that reason.  LSU may or may not need a quarterback in the 2010 class, but if the coaches believe a QB is necessary, it would be difficult to take Zach Lee because of the risk that he would bolt at the last minute for baseball.  Gibson could be a developmental quarterback, as he looks pretty solid as a deep-throwing, running out of trouble quarterback.  Signing Gibson would be a hedge against the risk involved in signing Lee.  And if Lee signs and comes to LSU, Gibson would probably slide into a defensive back position.

For those of you so inclined, here is a publicly available YouTube of Mr. Gibson: