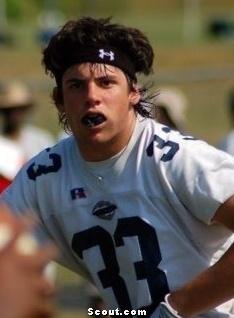 Cameron Fordham of Duluth, Georgia, who is the son of former LSU offensive lineman Jeff Fordham, a player from the 1980s Jerry Stovall era teams, received and offer from LSU coaches and committed yesterday.  Fordham is a 6'4" 240# tight end who is expected to grow into an offensive lineman in time.  He has not been evaluated yet by Rivals, but is listed as a 3-star by Scout.  He came to camp, worked out as an offensive lineman, and won a job.

LSU is by far the biggest program to offer him so far, as previous offers include Connecticut (really not bad, actually), UCF, Syracuse, UAB, and a few other schools along those lines.  It is important to point out that it is perfectly OK to a) be the only big school to offer and to b) be a small-program recruit if that big school doesn't offer.  Please keep in mind that schools like UCF, Connecticut, and others put players into the NFL every year.  Connecticut was actually the surprise program of the 2009 NFL draft, with several players drafted on the first day.  Granted, no big school has come after Fordham, and I think it's fair to say that as an offensive lineman he is a big project.  This may be why those other schools like Georgia, Georgia Tech, Auburn, and others that recruit the area heavily have not shown much interest.  He will have to put on at least 30 pounds to be an offensive lineman.

He has a year to do that before he ever gets to campus, but I imagine his high school coach will discourage much weight gain for now, as he is still playing tight end and linebacker for his Northview High School program.

Fordham is the 13th commitment to the Tigers for the 2010 recruiting class, and we are really starting to see how the class is shaping up.  There will be more thoughts on that subject in the coming weeks.