Share All sharing options for: Using Louis Coleman in the 8th Inning Against UVA Was a Good Move 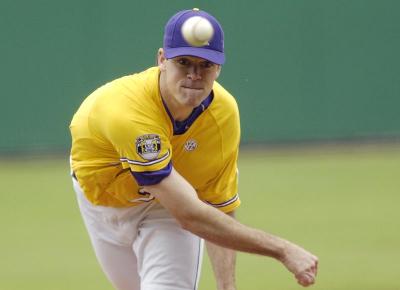 With his ace starter struggling and being taken out after a mere 3 2/3 innings last night, Paul Mainieri had to figure out how to get 5 1/3 good innings of relief from his bullpen.  After getting an inning from Paul Bertuccini, two innings from Austin Ross, and 1/3 of inning from Chad Jones, Coach Mainieri found himself staring at a precarious 1-run lead heading into the 8th inning.

He had some choices:

1.  He could stick with Chad Jones for a bit longer.  Left-handing hitting Danny Hultzen was due up first in the 8th inning.  If Jones could get through the first batter, he would have righties to face thereafter, and Mainieri would have a choice of leaving his left-handed specialist in the game but pitching a bit out of his element, or he could go to Matty Ott for a 5-out save opportunity.  Ott's not accustomed to pitching that long, and there would be risks entailed with either choice.

2.  He could make the call to Nolan Cain.  The senior righty hasn't gotten into games much since his 5-inning effort against Georgia in the SEC Tournament.  This probably would have been the move least likely to blow up in his face, because no one would ever say it was a bad move, even if it failed and Cain couldn't hold the Cavaliers down.  After one inning of Cain, he could then call on Matty Ott in the 9th.

3.  He could go with something radical.

Mainieri decided to go radical.  He brought in his ace starter to pitch the 8th, and supposedly left open the possibility that he would pitch the 9th as well.  We discussed this kind of situation last week as we prepared to face Rice.

But let's say we're up by 1 run, or 2 runs.  It gets to be a harder call.  Yes, Bertuccini and Cain and Matty Ott and the rest of the bullpen boys have been pitching well, but this is the sort of situation where it really could be worthwhile to bring in Coleman, who is clearly a better pitcher than anyone in our bullpen other than Ott.  If we're leading a tight game and we have 6 more outs to get, I think it would be worthwhile to call in Coleman in relief to get 3 of them.  Even in a 1-run or 2-run game, bringing in Coleman would probably ensure a win.  I can't say that bringing in Bertuccini or Haydel in that situation would ensure a win.

It is worthwhile to use Coleman in very short relief if it ensures a win in that first game.  With a win on Friday, we wouldn't need to pitch Coleman on Saturday and we could turn around and pitch him Sunday if we need to, but more on that below.

I endorsed the use of Coleman for 1 inning to preserve a slim lead then, and I endorse it now.

The situation Mainieri faced last night was an even better situation than that described above.  Against Rice in Game 1, we absolutely could not afford to use Coleman for an inning and then lose.  It would put us in the horrible position of having to play the next day in an elimination game, probably without Coleman available.  We would then be in a position of possibly being eliminated from the tournament with our best and most reliable starting pitcher having pitched only 1 inning.

No such risk last night.  Regardless of what happened last night, our next game would be two days later, and Coleman would have sufficient rest to start our second game if he was only used for an inning in the first game.

Also, we would not be showing a future opponent anything.  With Coleman scheduled to start on Monday against either Arkansas or Cal State Fullerton, he would not be ready to go again until the championship series, which would begin the following Monday.  We could potentially face UVA again either on Wednesday or on Friday, when Coleman probably would not be available.  If we survived to the championship series, it would be against a team in the other bracket.  Therefore, there is no chance Virginia would learn anything they could use in the future from their encounter with Coleman last night.  Throwing Ross was actually the bigger risk, as he would be our Wednesday pitcher if we needed one, or one of our Friday pitchers if he was not needed on Wednesday.

It was a good move, a move with very little downside.  A 15-pitch performance on Saturday isn't going to significantly limit a workhorse like Coleman on Monday.  Had we pitched him in the 9th, it might have been a different story, but using him in the 8th in a tight game was absolutely the right move.