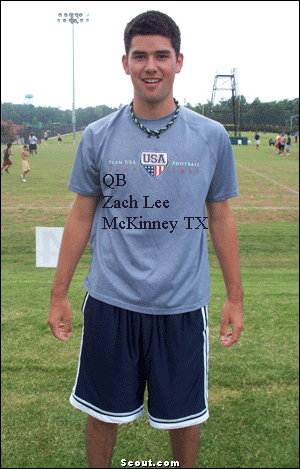 Quarterback Zach Lee of McKinney High School in McKinney, Texas has become LSU's 14th commitment for the 2010 signing class. We touched briefly on Lee's recruitment in our article on the commitment of Prattville star Sam Gibson.  The "P" listed in the title of this article is not for "punter".  It's for "pitcher".  Zach Lee is potentially a very high reward type player, in that he will be a baseball player as well as a football player.  He is also very high risk because he is considered a professional prospect as a right-handed pitcher who throws in the low 90s, and may never actually enroll at LSU.

Lee has been on LSU's radar for a while, and it's been clear that the interest was mutual, but LSU had some things to take care of before they could accept Lee's commitment.  First, they needed to hedge their bets on Lee going pro in baseball.  The recruitment of Sam Gibson, who is viewed as a likely defensive player, but could be a developmental quarterback, made it possible for LSU to really pursue Lee.  We know that LSU wants a quarterback in this class, and Lee's baseball status made it difficult for LSU to recruit him without a backup plan.  Gibson is apparently that backup plan.  If this class NEEDS a quarterback, and if Lee decides at the last minute that he is foregoing college, Gibson should be able to slide into that quarterback slot.

Both Gibson and Lee are outstanding (not just good, but outstanding) students, so neither is an academic risk.  Both are essentially "All American Boy" material insofar as academics and character go.

But that's not really all we need to discuss with Lee.  Of course, we must also discuss what kind of a prospect he is.  He's listed as a 4-star on Rivals and a 3-star on Scout, in a year that is generally considered a down year for quarterbacks around the country, with relatively few 4-stars and no 5-stars among the quarterbacks.  Lee comes from one of those oh-so-common high schools that run out of the shotgun in every play.  His videos are a little hard to follow because, like with Mike Davis's videos, the production values are very poor, in that the cameraman takes nothing but wide shots that show entirely too much field and make it impossible to really see what an individual is doing.  The football is impossible to see, which makes it pretty much useless in evaluating a quarterback.

What we can tell about Lee is that he has a strong arm (hence the 90+ mph fastball) and he is reasonably mobile.  He is also likely to join Paul Mainieri's team as a pitcher when his football duties are suspended.  In fact, baseball may end up being his future.

He chose LSU over offers from Nebraska, Texas Tech, Arizona, Arizona State, and others.