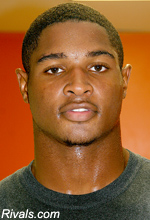 It was a pretty big weekend for news all around the LSU athetic department as rumors abound that super recruit Craig Loston is likely to qualify academically, Tasmin Mitchell is likely to return to the basketball team for his senior year, and that linebacker Justin Maclin (no kin to Rudy, to my knowledge) of Ridgeway High School in Memphis, Tennessee, has committed to Les Miles and the LSU Tigers.
Maclin is an important part of the puzzle for this recruiting class.  He has terrific size and speed for a linebacker, as he is listed at 6'4" and 215# on Rivals and 6'4" 225# on Scout, with 4.5 to 4.6 speed.  He's a 4-star on both services, and recruiting watchers have kept an eye on him since 2008.  He was recruited by Larry Porter, who had the advantage of close connections to those around Maclin from his days as a player at University of Memphis.
It appeared for a while that Maclin recruiting would come down to a battle between LSU and Bama, but the last couple weeks illustrate how things often just seem to sort themselves out.  Maclin was seriously considering Alabama in the early part of his recruiting, but the Crimson Tide accepted a commitment from another player who projects at outside "jack" linebacker.  Suddenly the way was cleared.
Maclin has offers from all over the place, and while he had an offer from in-state Tennessee, he apparently never really considered it.  He also claims offers from USC, Florida, Vandy, and others.  At this point, I think he is a very solid recruit who could end up at outside linebacker, or perhaps even middle linebacker or defensive end, depending on how his body develops.  He is tall and has long arms.  His athleticism is very high.  He compares very well to a guy like Barkevious Mingo from last year.
He has the offer sheet of a 4-star prospect.  His video is a little hard to gauge.  Scout has extensive video of him, but it is often difficult to figure out which one of the blobs is him.  When you can pick him out, you often see that he is playing unblocked.  He always rushes forward and disrupts the running back or the quarterback, often with his long arms.  I can't really tell how he is going to do when he has to fight off an SEC-level blocker.  As a prospect, he is good, but I think he has a lot to prove.  At lsu he will join what looks like it will be a pretty big linebacker class, with Luke Muncie and DJ Welter already in place, and rumors of more to come.