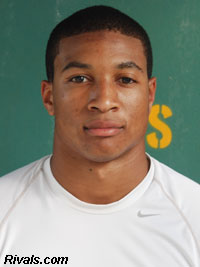 The LSU Tigers got another bit of good news yesterday as 4-star defensive back Ronnie Vinson committed to Les Miles and the Tigers.  Vinson is one of the top 2 or 3 players in the state of Louisiana, as he hails from Newman High School in New Orleans.  Both Rivals and Scout rate him as  4-star, and he is ranked #124 in the Rivals 250.  Some schools were recruiting him as a defensive back, and some schools were recruiting him as a running back.  At LSU, he will be a defensive back, probably at corner.

Ronnie Vinson probably could have gone anywhere he wanted.  He claims offers from all over the SEC, Michigan, USC, UCLA, and others, but I know that LSU always considered him to be a pretty heavy lean.

Just judging from the picture above, and other pictures of him like it, Vinson does look a little thick to be a cornerback, but his measurables are fine for the position.  He lists at 5'11" and 186# on Rivals and 190# on Scout.  He is listed on both services as running a 4.5 40 yard dash, but his coach claims he runs a "legitimate 4.4" according to this article.

His highlight videos are a joy to watch.  He is mostly playing running back, and his change of direction and straight-line speed both suggest he could do very well at cornerback.  On defense, he is usually playing safety, and his hard tackling suggests he will be a physical cornerback.  In his videos, he does not look nearly as big as his photos suggest.  I think he is just thick-necked, but not stocky and stiff like you might be led to believe just from looking at him.  He is certainly not stiff, at least.

I imagine he's the kind of player who will be an immediate contributor on special teams.  His speed and his physicality just scream out to me that he should cover kicks.  I am past the point of thinking that any kid is a "can't-miss" prospect, but Vinson enters a situation where there are few impediments to his success.  Patrick Peterson and Brandon Taylor will be juniors when Vinson arrives, and Ryan St. Julien will be a redshirt sophomore.  With no corners signed to the 2009 class, Vinson and the other cornerbacks of the 2010 class (whoever they will be) will have no one immediately ahead of them.  It's a good spot for a young player to be in.