Share All sharing options for: Big Games On the Schedule, Part 3, 11/7 @Alabama 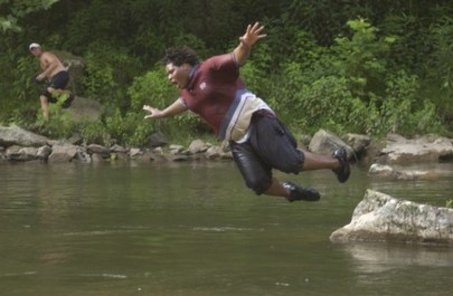 Yes, his physique is often subjected to ridicule, but he's an outstanding football player.

While we've struggled to figure out if certain games really were big games or not, there's no doubting this one.  Even if Bama wasn't the defending SEC West champs and a consensus pre-season top 10 team, we'd still have the Nick Saban sideshow, and it would still be a conference game on the road against a team that beat us at home last year.  But they are the defending division champs.  They are a pre-season top 10 team.  They did beat us at home last year.

Alabama was not expected to be that great last year.  If you want a nice laugh, read my brief overview of Alabama found here.  Money quote:  "The team went to a 3-man front to compensate for poor depth of talent, but it's still a problem there.  Combine that with the problems at linebacker, having only one linebacker with starting experience returning, and this looks like a weak front 7 on defense."  That's what you get trying to predict with incomplete information, which is, unfortunately, all we can do is July and August.

But let's go through just a few reasons why Alabama was able to do the unexpected last year:

1.  A fortunate avoidance of injuries.  Among starters, key reserves, and specialists, how many man-games did Bama lost to injury in 2008?  I recall Andre Smith missing the Tulane game with an injury.  Terrance Cody either missed a couple of games or was very limited for a couple of games.  That's really it.

2.  A freshman class that was able to immediately fill roster holes.  What Bama was able to do with its true freshmen last year really is very unusual.  To find 3 difference-makers among your freshman class is highly unusual.  Bama found Julio Jones, Don'ta Hightower, and Terrence Cody, all of whom had All-SEC calibre years at positions that looked like huge weaknesses going into the season.  Cody was a JUCO transfer and so not a freshman, but his play had to be a surprise to everyone, and was a big reason they had so much success.  They also found Mark Ingram, who proved to be a very serviceable running back in the rotation.  True freshmen usually play on special teams or in limited packages.  If pressed into full-time service they are often hidden or given lots of support by veterans around them.  Bama had a couple freshmen who became instant impact players as full-time starters.  That is highly unusual.

3.  A quarterback whose junior-to-senior maturation was not anticipated.  John Parker Wilson was a pretty ordinary quarterback in his sophomore and junior seasons.  Prone to mistakes and only adequately productive (yes, I know he set Bama records, but even when he set Bama records he was only mid-pack in the SEC; it's called evolution of the game, people).  In his senior year, probably due in no small part to a change in the offensive coaching staff and a commitment to emphasizing the running game, the mistakes disappeared.  Add in an All-SEC calibre freshman wide receiver to what was a pretty lackluster receiver corps and you get a more productive quarterback as well.

There are other reasons, but those are the big three reasons, in my opinion, of why Bama was able to have so much success last year, and why it wasn't anticipated.

The question is, what of this year?  Bama did not lose a lot of players off of last year's roster, but they lost some key ones.  Andre Smith declared for the NFL after his junior year, and we all saw what happened to the offensive line in his absence against Utah after he was declared ineligible for what we presume is contact with an agent.  Center Antoine Caldwell joins him in the League.  Rashad Johnson took his heady secondary play to the NFL.  Running back Glenn Coffee is off to the NFL.

Much talent returns, including the entirety of a very talented linebacker corps and most of the defensive line rotation.  They will have to figure out how to move the ball with a new quarterback, a completely revamped offensive line, and a new running back rotation in which Mark Ingram may have to be the headliner rather than the supporting player.  They are high on Greg McElroy who they think will adequately replace John Parker Wilson and who may end up being an improvement over good old JPW, in time.  Glen Coffee was a fine player, but I think he's replaceable.  The keys are going to be rebuilding that offensive line and replacing Rashad Johnson, who really meant a tremendous amount to that team, and who was by far the best player in a secondary that was probably the biggest vulnerability on the team.

The other key will be avoiding injuries.  Greg McElroy has looked good, but his backup right now is Star Jackson, who if the Spring Game is any indication, is not close to ready to contribute in the SEC.  The depth still may be lacking, though it is certainly improving.  Developing complementary wide receivers and a backup quarterback could end up being season-saving moves if they are accomplished.

The Bama defense should be very good in the front seven.  I still think there are vulnerabilities in the secondary, as Utah and Florida (and other teams as well) showed at times last year.  The offense will have to figure out how to move the ball without an Andre Smith opening up holes or protecting the QB.

Bama should be very good again this year, but I don't think this is a team that is a sure bet to still be in contention at the end of the season.  Some teams are able to fill the holes with good players.  Some teams can't.  Some teams are fortunate enough to avoid injuries, but sometimes they can't do it two years in a row.

If LSU is as good as we hope we are, this could be an outstanding game again.  If you recall, we gave Bama all they wanted last year, taking them to overtime in a game we really could have (perhaps should have) won despite erratic QB play.  Once again, it will be a game where both teams are emotionally charged up and ready to go, as has been the case each of the last two years.  Personally, of all the games on the schedule, this is the one I am most looking forward to, because it's taking place where I live and because it's a great and fun time due to the Saban story, and because these should be two fairly evenly matched teams.