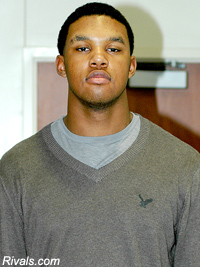 Tigers coach Les Miles received a bit more good news yesterday.  DeSoto, Texas, offensive lineman Evan Washington committed to LSU and his commitment was accepted.  Washington is definitely a bit of a project in that last year was his first year of organized football.  He is very large already at 6'5" and 290#, so he doesn't exactly fit the usual Tiger mold of starting slim and building up in the strength and conditioning program.

I am absolutely not an expert in evaluating offensive line film, but in watching his film, you get a little bit of a sense of what a project he is.  Most of the plays he is at right tackle, and it looks like he'll probably settle in at right tackle or at guard.  He plays a bit high and upright for a lineman and will need to improve his technique.  You would also like to see a bit more aggression out of a big offensive lineman.  What you do see, however, is the athleticism.  He has quick feet and good hands, honed in years of playing basketball, where he reportedly excelled.

Any time you get an offensive lineman who is a really good basketball player, the potential is there to have a good one.  This is not to say he's definitely destined for greatness, but between his size, his athleticism, and his quickness, you have to like the tools you have to work with.  It also is an encouraging sign that his father was a professional athlete, 11-year NFL defensive end Marvin Washington.  The linked article also indicates that he is a very good student, so he'll definitely make it to campus.

Washington joins projected center Cameron Fordham (also with athletic bloodlines) and Jamarcus Hardrick (JUCO) in an OL class that may be just about done.  With limited scholarships, depth in place, and a very good class waiting in 2011, Les Miles can afford to be selective in recruiting offensive linemen and not take the numbers he took in previous years.  Washington is also the 4th commitment from Texas for this class, and the 10th from out of state.

This also reminds me that I really need to start introducing you guys to the 2009 recruiting class, most of whom are now officially enrolled as Tigers.  I'll get on that later this week.