Share All sharing options for: Big Games On the Schedule, Part 5, 11/28 Arkansas 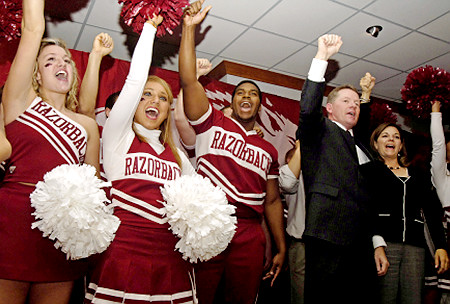 Inner Butthead is now purged.  We move along.  The last "big game" on the schedule is the last game on the schedule.  The Arkansas Razorbacks were one of the worst teams not only in the conference but in all of FBS football at the beginning of last year, barely surviving against FCS opponents Western Illinois and UL-Monroe, beating both in close, hard-fought, not-decided-until-the-final-moments games.  They were then beaten to a bloody mess by Alabama, Texas, and Florida.

But by the Florida game, they were showing signs of life.  The game was reasonably close going into the 4th quarter.  Alright, 17-7 is not exactly a nail-biter but it's not terrible.  A bad 4th quarter turned a respectable showing into a 38-7 drubbing, but by this time running back Michael Smith had emerged as one of the very best runners in the conference despite being a tiny 5'7" 175#.  A very young team that was playing a lot of freshmen was starting to get better.

From this point on, Arkansas was a legitimate team.  They would still have some stumbles along the way, losing to Mississippi State and Kentucky (the loss to Kentucky occurred in a game in which Michael Smith played very little due to injury), but they would beat Auburn and Tulsa and put a scare into Ole Miss.  They would, of course, beat LSU to close out their season.

The 2009 Arkansas Razorbacks promise to be a good team, building on what they accomplished towards the end of last year.  They are almost everyone's pick to be an SEC dark horse, so much so that it is really hard to say they're actually a dark horse rather than just a good team. 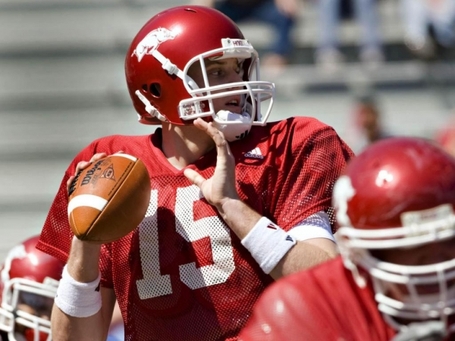 If you are paying any attention at all to Arkansas, you know a bit about Ryan Mallett.  He is the former big-time recruit from Texas who originally signed with Michigan and played one year there, eventually earning the starting job, albeit on a team that failed to reach a bowl game.  After reports of homesickness trickled out early in his stay there and after Rich Rodriguez was hired, Mallett decided to bolt and move closer to home to Arkansas, where he was given a hero's welcome by newly hired head coach Bobby Petrino, who was quite understandably trying to find the heir apparent to Casey Dick.

Mallett is a big (6'7") strong-armed quarterback who is not likely to beat you with his legs.  He is going to be a ball-distributor, which is perfect for the Petrino offensive philosophy.  In fact, he may be the best quarterback talent that Petrino has ever coached.

He'll have a few targets to pass to.  DJ Williams was one of the most productive receivers in the league last year as sort of a tight end/wide receiver hybrid.  The rest of the receiver corps is a bit undersized, but productive.  London Crawford is the biggest at 6'2" and the rest are below 6'0".  They are small but quick receivers in the Tyrone Prothro mold.

If there's a weakness on offense, it will be on the line, where they struggled last year.  Still, a young team gets better, and Bobby Petrino is an outstanding coach for whatever his personal failings may be.

Defensively, there are no big names there, but the unit made great strides towards the end of last year.  Still, they were last in the league in scoring defense and total defense, and that will have to improve more than a little bit.  A unit that ended up being surprisingly competent last year needs to find some difference-makers.

Look for Louisiana product Jerico Nelson to emerge as a very solid safety for this team.  He's little, and for one reason or another the Tigers didn't really want him in the 2008 class, but he was an immediate contributor for Arkansas and could be an emerging star on this team.

Last year's game still leaves a bad taste in our mouths.  Arkansas was a terrible defensive team, and in particular terrible against the run.  Charles Scott should have been able to run wild on that team and get 6 yards a pop.  Instead, he was mostly bottled up, averaging only 2.3 yards per carry.  The problem was likely that the Tigers could not legitimately sell the pass as a big threat with true freshman Jordan Jefferson making his first start of his career and being used primarily in a running capacity until the end.  It was a tough start to Jefferson's tenure as our starting quarterback and I'm sure he learned a lot from it.

Still, we were winning the game and on the verge of victory when our pass defense, pretty much a failure all year, did what it did best.  It failed, giving up a long drive at the end, culminating in a 4th down pass to the end zone caught for a touchdown over Chris Hawkins, who was caught in one-on-one coverage.  Even then we had a chance to win it at the end when we got good field position and needed only about 15 yards to have a legitimate shot at a game-winning field goal.  A few ill-advised deep passes fell incomplete and we ended the game with a desperation field goal from the parking lot that did not make it.

This year, it's going to be a war.  I suspect that by the end of the season both of these teams will be much better than they were at the end of last year.  The game will also be on a Saturday night for the first time..  ever?  Of course, since this is the last game of the season, this is the matchup we know the least about.  It is the most likely to be affected by injuries or by players who improve over the course of the season.  Right now, we wonder if Arkansas's run defense is going to improve from bad (notwithstanding their game against us) to OK or better.  We wonder if LSU will have a good pass defense, and whether Arkansas will have more than one really good receiver.

This is the end of this little series.  We will have more coverage later.