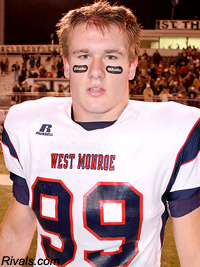 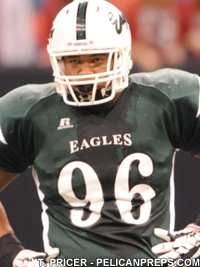 This weekend, Les Miles held the second offseason football camp for recruits and young players to come to LSU, get a little coaching, and get evaluated and/or recruited by the Tigers.  It is also just a coaching camp where hundreds of young men can pay their way to come to Baton Rouge to learn a little more football.  The camps are usually big events for recruiting.  At or near the last LSU football camp in June, LSU received commitments from offensive lineman Cameron Fordham, athlete Sam Gibson, defensive back Ronnie Vinson, and linebacker Justin Maclin.  This camp has so far seen the commitments of defensive end Jordan Allen and projected offensive lineman Elliott Porter.

Jordan Allen is a fairly big name in recruiting circles.  He is an accomplished player at arguably the primary feeder school to LSU, West Monroe High School in West Monroe, Louisiana.  The 2009 class saw LSU receive a commitment from Barkevious Mingo (he of the 2009 Name of the Year Award) from West Monroe High.  Sophomore offensive lineman Will Blackwell, who probably will be first or second offensive lineman off the bench for LSU this year, is also a West Monroe product.

Allen is a pretty big kid at 6'5" and over 240#.  He looks like he can probably put on another 30 or more pounds to play at the next level, which may necessitate a move to the inside for him.  Jordan Allen is a 4-star on both Rivals and Scout and is generally considered one of the better players in the state this year, perhaps the best.  Being a West Monroe product he is going to be well-coached and technically sound.  His film shows him to be solid in all respects, capable of running over players or out-quicking a bigger lineman.  I would not say he shows awe-inspiring superstar potential at this point of his career.  Then again, neither did tyson Jackson.  If I had to compare Allen to a more recent recruit, I would compare him to Cousin Kirston or to Pep Levingston, solid in all respects but not really superlative at anything.  There's nothing wrong with that as a prospect, as that sort of player can be an every-down contributor on a good team.

Allen has been a strong lean to LSU throughout the process and is choosing LSU over offers from all over the SEC, Nebraska, Michigan, and Clemson.  His commitment to LSU is not a big surprise, except that many people believed he would take a few trips and commit at a later date.

Elliott Porter is a more interesting story.  Porter is a product of Shaw High School in New Orleans and is listed at 6'4" and 280#.  He came to the June camp as a defensive lineman.  The coaches asked him to run a few drills at offensive guard and liked what they saw enough to offer him a scholarship as an offensive lineman, even though he had rarely played the position.  The coaches saw potential there, though, and Porter did not have to think too long about it before he decided to commit in advance of this weekend's camp.  He is listed as a 3-star on Scout and is as-yet unevaluated on Rivals.  I imagine he will start out as a 3-star when he gets his evaluation.

With the Porter commitment, LSU is likely finished with offensive line recruiting for the 2010 class, unless a can't-turn-down prospect really wants to join up, which probably won't happen.  Barring unforeseen circumstances, the 2010 offensive line class will be Porter at guard, Cameron Fordham at center, Evan Washington at tackle or guard, and JUCO transfer Jamarcus Hardrick at tackle.  it will be an unusually small offensive line class, especially when you consider that Hardrick will be a couple classes ahead of the other guys, but the purpose is to recruit a few quality players and set up for a big haul in 2011.