Share All sharing options for: Class of 2009: OL Josh Williford 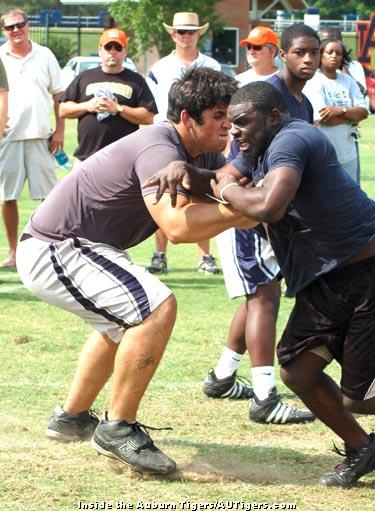 The first prospect we will profile in our ongoing series on the Class of 2009 is Dothan, AL offensive guard Josh Williford.  Josh is a big, big kid at 6'7" 345#.  He's definitely a project, though the potential is there for him to be an outstanding lineman.  He is a strong kid with good flexibility and surprising athleticism.  He will have to learn how to use his size to his advantage at the college level and maximize what he is able to do with that bulk.  In high school, he is able to simply lean on smaller, weaker players.  That will not be as easy in college and he will have to learn the technique to use that size.

He will also, of course, have to develop his strength and put the right kind of weight on that body.  LIke all very large freshman, I am sure Williford did not report to LSU with quite the body sculpting he will need.  What happens to that frame when it works out properly?

Josh Williford is a very intriguing prospect.  He was not heavily recruited out of Alabama, though both Auburn and Bama showed interest and were evaluating him before he committed to LSU.  His 3-star rating on both services is probably fair.  He was not heavily recruited by all the powerhouses.  Some programs, like LSU and Ole Miss, really liked him.  Others were more cool.

This does not bother me.  Les Miles is kind of peculiar about what he likes in an offensive lineman.  What he likes may not be the same thing that Nick Saban or Urban Meyer like.  And had Bama and Auburn gotten a better opportunity to evaluate Williford before his commitment to LSU, they may have ended up offering him.  Who knows?

Williford is a guy who could end up being a 3-year starter and an All-SEC performer.  Or he could end up never breaking into the rotation.  His size and quickness-for-his-size suggests he could have a very high ceiling, but these are the sorts of players who are the most unpredictable.  What will happen to him when he gets into a college weight room?  Will he lose his quickness while adding the strength he needs?  Or will he get quicker and become a star?  Will a raw talent like him be able to master the skills he'll need to master?  If so, he could end up being a very familiar name in a couple years.

He could be the next Herman Johnson.  Or not.  We can't really tell right now.  Taking a commitment from a guy like Williford is like buying a raffle ticket.  If it works out, it could work out big.  If not, it's no big deal really.

I would certainly expect a redshirt year out of Williford.  The offensive line is deep, considering we the entire class of 2008 back as 2nd and 3rd stringers.  Barring a horrible sequence of injuries, none of the 2009 linemen will likely be expected to contribute early, unless they simply win the job.  Josh Williford is the kind of recruit we as fans should just forget about for a year or two until he develops.  If he works out, we will know it by about 2011.