Share All sharing options for: Class of 2009: RB Drayton Calhoun 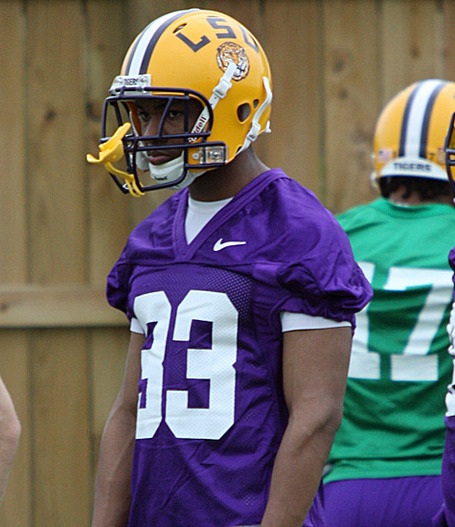 Tucker, Georgia, product Drayton Calhoun was an early commitment to LSU.  He was also an early enrollee, meaning he graduated from high school one semester early and enrolled at LSU in time to participate in Spring Practice.  Because Calhoun was an early commitment and never wavered, he did not really get a lot of attention from the recruiting media as the season wore on, but he had a very good season with the Tucker Tigers, winning the class AAAA state championship in Georgia.

Drayton Calhoun is a 6'0" (probably a generous listing) 175# athlete.  When he committed, I watched his highlight videos and saw a running back who had terrific acceleration, quickness, and speed, but who was called upon by his coaches to always run outside the tackles with reverses or to use counter plays.  His film showed almost no traditional running back play where he got the ball on a handoff or pitch while in the backfield.  Everything was a reverse from an H-Back position or a counter.  Because of this, I did not see him as a running back and expected him to be a defensive back at the next level.  Slot receiver was also a possibility, but we also did not see him catching a lot of passes.

He is currently listed as a running back on LSU's semi-official roster.  I still don't see it.  For that reason, I consider Calhoun a project.

I have a theory, developed years ago when I was really big into hockey and paid just as much attention to the development of hockey players as I do now to the development of football players.  This theory is that players rarely add elements to their games after moving up to a higher level of competition.  In hockey, this meant that if a player was not a scorer in junior hockey, in all likelihood he would not be a scorer in the AHL.  If he was not a hard hitter in junior, he probably would not be a hard hitter in the AHL.

This should not be that surprising, but the key part of the theory was the converse.  A player might lose an element of his game after moving up to a higher level of competition.  A big scorer in juniors might suddenly be unable to score in the AHL.  A guy who hit like a ton of bricks in the AHL may find himself unable to line up a check in the NHL, or may shy away from the contact altogether because the adversaries are so much tougher.

What does this have to do with Drayton Calhoun?  If the theory holds in college football, it means that Calhoun, who did not have the "tough runner" element available to him in high school, probably will not be able to develop it in college.  He was a pure speed runner and slasher in high school.  He was not really a tackle-breaker.  We can't expect him to suddenly develop the skill of running through arm tackles in college, as the arms he'd be running through are a lot stronger than the ones that the coaches tried to avoid having him contact in high school.

As a running back, he reminds me a lot of Bama running back Terry Grant, a fellow speed back who had really nice production in 2007 with 891 yards, mostly to the outside.  Then, because he was unable to run effectively inside, he was shunted aside when more well-rounded backs like Glen Coffee and Mark Ingram emerged, players who could run both inside and outside and therefore wouldn't be as predictable as Grant.  I see Calhoun the same way, except that I doubt there would ever be a time when a one-dimensional outside runner could be our feature back.

There are a lot of electrifying runs in Calhoun's highlight reel.  He clearly is a fine athlete.  I just don't think he is a running back.  He may be a punt returner, though.  He seems to have the elusiveness one would look for in that position.  I think he will probably eventually move to the defensive back.  If you want a comparison to recent well-known recruits, I would submit former Tiger John Williams and current Tiger Ron Brooks, both of whom came to LSU a little undersized but with obvious quickness and speed on their resumes.  Brooks moved to defense and found a home as the likely starting strong safety in this his sophomore year.  John Williams has never been quite able to find a home after bouncing from wide receiver to defensive back and back again.

I would like to see Calhoun move to cornerback sooner rather than later.  I suspect the only reason he is not there now is because he was promised a shot at running back.  There were no pure cornerbacks signed in the 2009 class and the opportunity is there, as a redshirt year would put him two years behind Brandon Taylor and Patrick Peterson with really no can't-miss prospects lined up after those guys right now.

Maybe I'm wrong.  I'd love to be.  I'll be first to quote this article mockingly if I am.