Share All sharing options for: Class of 2009: OG Carneal Ainsworth 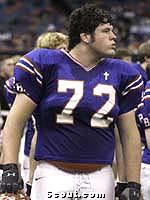 While West Monroe High School has been a very reliable feeder school for LSU, Parkview Baptist High School is quickly challenging its supremacy as the state's greatest feeder school.  Parkview has given LSU Darry Beckwith and Clay Spencer, a redshirt freshman offensive guard, and now you can add Carneal Ainsworth to the list of players at LSU from across town.

I am in the habit of heavily weighting my project label towards offensive linemen, simply because it is rare for an offensive lineman to be ready to contribute immediately.  For whatever reason, except for the Andre Smiths of the world, it is just not common at all for a true freshman offensive lineman to be a significant contributor.  I will call Ainsworth a project as well, but I think he is not nearly as raw as Josh Williford.  He also does not have that enormous body.  He's pretty big himself, at 6'4" and 300#, but looking at that picture I'm not sure he can add any more bulk, while Williford could probably play at 360# and not have a problem with it.  Ainsworth just doesn't have nearly as far to go to be ready.  He plays aggressively and uses his weight effectively.  He is surprisingly quick for a man his size.

The big concern about Ainsworth is his ability to maintain his health.  He suffered multiple knee injuries in high school, including a torn ACL.  I'm not a doctor or an expert, but to me he just looks like he has the kind of body that is hell on the knees.

Of all of our offensive lineman prospects, he may be the one most likely to be a contributor if he avoids further injury.  I just don't know what his upside is.  Is this a kid who is going to be like a Lyle Hitt, whose steadiness has made him a 3-year starter?  Or will he get stuck behind players whose upsides might be higher and end up as a backup?

I wish I had the answers to those questions.  With 15 scholarship offensive linemen currently on the roster after the 2009 class is added, I am sure the coaches don't know either.  Ainsworth will be competing with his former high school teammate Clay Spencer (among others) for a spot replacing the senior offensive guard Lyle Hitt when he finishes his eligibility.  It will be one of the more interesting position battles to watch, because there are a lot of players trying to win that spot.  Ainsworth looks like he could be right in the thick of that battle.