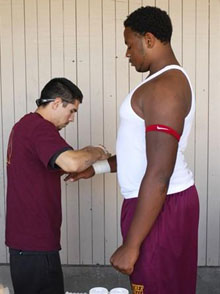 That is one of my favorite pictures ever.  It almost rivals that picture of Trindon Holliday and Herman Johnson.  By the rules I set up in doing this series, I have no choice but to label Akiem Hicks a mystery man.  There's no film of him.  There are hardly even any pictures of him in action.  If you search for photos of Akiem Hicks on Google, you come up mostly with pictures of other prospects, like Kenny Bell, Chris Davenport, and Craig Loston.  Even the official LSU bio of Akiem Hicks is sparse in its information.  Do not fret.  Our mystery man from the 2008 class is getting raves as one of the next great offensive linemen at LSU.

This is not to merely surrender.  There are still things we can tell you about Akiem Hicks.  He is a product of California high schools and went to Sacramento Community College to play his first two years of college football because he could not get eligible to play FBS football.  He was fairly heavily recruited at Sacramento CC, earning offers from multiple BCS and non-BCS institutions ranging from LSU and Tennessee to Oregon and South Florida.  I wouldn't go so far as to say, "Everyone wanted him," because frankly not everyone has a need for a JUCO defensive lineman.  LSU did, and that's going to be where we put our focus.

One of the difficulties facing LSU this offseason has been the loss of 5 of our top 8 defensive linemen.  Tyson Jackson, Marlon Favorite, Kirston Pittman, Ricky Jean-Francois, and Tremain Johnson are all gone off of last year's squad.  Those are 3 starters and 2 primary backups.  Even though we all think Drake Nevis is going to be a star, and that Rahim Alem is a star already, we have to be concerned about defensive line depth.  Our top 3 defensive tackles are Charles Alexander, Al Woods, and Drake Nevis.  Both Alexander and Nevis have had injury problems of varying degrees.  After those three, we are going to have to ask freshmen to step in to play.  At defensive end, only the starters Rahim Alem and Pep Levingston have any experience at all playing on a college field.  While we all believe that Lavar Edwards, Cordian Hagans, Chancey Aghayere, and Chase Clement can play (plus all the really good-looking defensive linemen from the 2009 class), I can't blame Miles for wanting to bring in a more mature and experienced alternative while the freshmen get acclimated.

Plus, after the 2009 season, the only contributors to the 2008 season remaining will be Nevis and Levingston, who were probably the 9th and 10th defensive linemen on the 2008 squad.  Adding Hicks to the equation is a nice insurance policy.  I'm not saying he's going to be a star player, but who knows, he might be.  As I said, it's not like we really know much about him.  It's just that after the first few defensive linemen in the rotation, our DL gets awfully young awfully quickly.  It's a smart move to bring in an experienced player who will be here for two years while we sort out the next generation of defensive linemen at LSU.

Hicks reportedly can play any position on the defensive line, though his 6'5" 295# frame would suggest he's more natural on the inside.  He would be an awfully big 4-3 defensive end, but I suppose he'll play where he's needed.