Share All sharing options for: Class of 2009: LB Lamin Barrow 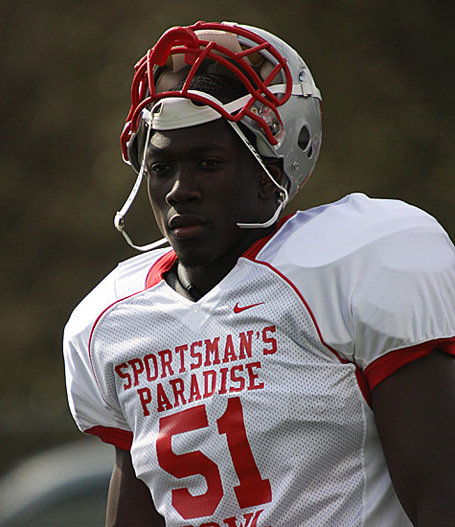 Linebacker Lamin Barrow of John Ehret High School in Marrerro, Louisiana, has a lot about him to admire.  He appears to have the size and the strength to be a good college linebacker at 6'2" 220#, and his measurables are very good.  He's a good kid from a good high school program at John Ehret.  He had offers from several BCS programs.  He was productive in his senior year, recording over 70 tackles and 5 forced fumbles along with 2 interceptions, earning All-State honors in the process.  However, I think in fairness he has to be labeled a project (I promise, we're getting to "solid players" and "headliners" soon).

I say that because his highlight film, frankly, is not all that impressive.  While he is a big guy who lists 4.6 speed in the 40 yard dash, he does not seem to play all that fast.  He has the tools, but it seems he has not figured out how to use them yet.  He seemed to be a little behind the play, and when he got to the ballcarrier, he did not necessarily get there in as foul a mood as one would hope.  Or maybe his highlight reel did not include his best plays.

Barrow joins a pretty strong linebacker class.  You will definitely see Barkevious Mingo and Kevin Minter later in this series.  Barrow may grow into, and in fact may be more suited to being, a defensive end.  He appears to have the kind of frame that could add 30 or more pounds.  If he stays at linebacker, he will have to learn to be more aggressive and quick to the attack than he showed in his videos.  I think this will probably require a pretty substantial adjustment.

If I could make a comparison to him, I would say he reminds me a bit of Luke Sanders.   Like Barrow, Sanders' recruiting videos showed him to be good in pass coverage and pretty athletic, but perhaps without the fully developed ability to use it.  Sanders developed into a useful player for LSU, and Barrow could as well.