Share All sharing options for: Class of 2009: WR/Ath Morris Claiborne 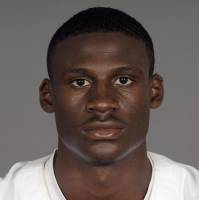 Morris Claiborne of Fair Park High School in Shreveport is one of the more interesting prospects in the class of 2009.  While the class of 2010, as presently constituted, has included so far a number of players who are relatively unknown in the recruiting media before their senior years begin, Claiborne was completely unknown until well into his senior year.  When he committed to LSU shortly after receiving an offer, most observers knew very little about him.  The recruiting services not only did not have film, they did not have a picture of him.

How does a player completely escape media attention so thoroughly?  Let us answer that question by dispelling a few myths.

First, it is not true that great athletes are sure to be found at all.  Colleges have only a handful of potential scouts available to them: a head coach and 9 assistants, plus probably a few others who may not be able to make contact with recruits, but are free to go and watch them.  I do not even have a guess as to how many high school football teams there are within 300 miles of LSU, but I can guarantee that it is impossible for any college team to have enough resources to get to all of them.

Instead, the coaches do much of their talent evaluation through high school coaches sending film, potential recruits attending camps, and general knowledge of a small number of typical feeder schools.  If a player does not come from a typical feeder school, does not attend recruiting camps, and does not have the marketing power of some of the bigger schools, it is entirely possible that he will completely escape the attention of the big-time programs.  This is one of the reasons that good players end up at places like Arkansas State and Rice on a regular basis?  Probably, the bigger schools just never knew about them.

Such was likely the case with Morris Claiborne.  He did not attend camps, and Fair Park High School rarely puts out big-time prospects.  There is no junior film of him.  What happened was either that the coaches first saw Claiborne while scouting a different player for an opposing school, or a coach or parent sent some film in late.  Whatever happened, the coaches liked what they saw.  They offered and he accepted.

On LSU's roster, Claiborne is listed as an "athlete", meaning he does not have an assigned position as yet.  Without a position to play, I have no choice but to label Claiborne a project at this point.  It is expected that he will be a wide receiver, but perhaps he will move to defensive back, as his 6'0" 180# frame seems more suited for the defensive side of the ball than the offensive, but he is quite an electrifying athlete with the ball in his hands.

For Fair Park, he played mostly quarterback.  He was one of those quarterbacks that was simply the best athlete on the team, so his coaches wanted the ball in his hands on every play.  He will certainly not be a quarterback in college.  His film is very impressive.  He has terrific raw speed and change of direction.  He is the sort of player who could be a slot receiver and take short passes for long gains.  Or he could be a cornerback and use his quick change of direction to keep up with wide receivers.

I like him quite a lot as a prospect, but he must find a position to play and settle into it, learning the techniques of either a corner or a wideout.  The longer he waits to settle into his ultimate position, the more difficult it will be to develop into a productive player.  He is, in that sense, like a Ron Brooks or a John Williams.  Brooks settled into one spot and is excelling.  Williams has been unable to find where he fits and has not been a productive player yet.  If Claiborne finds his spot, his pure athleticism will give him a very good chance to develop into a good or even a great player.