Share All sharing options for: Class of 2009: LB Tahj Jones 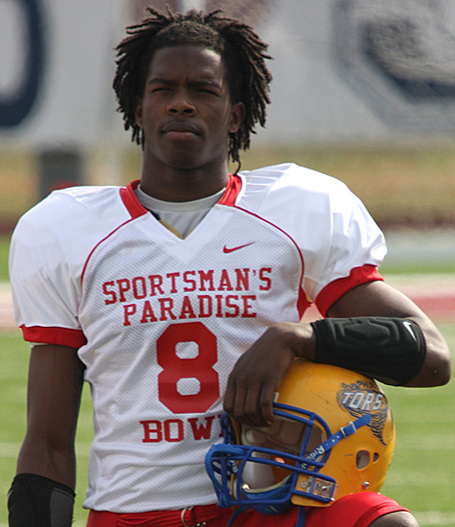 Sulphur, Louisiana, linebacker Tahj Jones is another linebacker prospect about whom there is much to like, but like with Lamin Barrow, there are obstacles there that may or may not be surmountable.  In many ways though, Jones is the anti-Barrow.  While Barrow had the size and strength to be an outstanding linebacker but needs to work on playing with speed and aggressiveness, Tahj Jones plays with plenty of speed and aggressiveness, but at 6'2" and 200# give or take, he will have to get bigger to be a useful linebacker.  For that reason, Jones is a project, the final project we will be profiling here.

Jones was a very productive player in Louisiana high school football, earning Class 5A All-State honors.  His highlights are pretty impressive as well.  He is a sideline-to-sideline linebacker who the coaches will stick on the outside and tell him to make plays from the middle of the field to the sideline.  He reminds me a fair bit of Rennie Curran or Ryan Baker, both of whom are smallish but fast and aggressive linebackers.  Curran is an All-SEC guy and Baker is a very solid young reserve for LSU.  The problem is that as a linebacker, he will be called upon to tackle 240# backs who are running at full speed straight at him, at least occasionally.  Jones is not a safety, only asked to provide support in those situations; he is a linebacker who will have to be able to stand his ground when the next generation of power back is bearing down on him.

In order to have success at that, Jones will have to gain at least 20 pounds and probably more, and if he can't do so without losing his characteristic speed and quickness, it is hard to see how Jones can be a useful player other than possibly covering kicks.

The other problem with Jones is that he is not yet academically qualified to join the team.  I would expect that assuming he gets qualified, he would redshirt his first year while he focuses on going through the workouts and keeping his academics straight.