Share All sharing options for: Class of 2009: Stavion Lowe 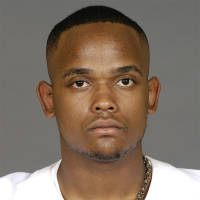 When I started plotting out this series, my initial thought was that Stavion Lowe of Brownwood, Texas, would probably be a project.  After all, he is an offensive lineman which is a position that usually requires a pretty long lead time.  The picture above suggests he may need to make some body-shape changes (look at the decidedly un-lineman-like thin neck).  Then when I went back and watched his videos, I was very surprised.  Surprised enough to name him as a solid player rather than a project.

While many lineman are good at a few things, but struggle in other areas, Lowe is not like that.  Some lineman may play with a mean streak but struggle getting out to the second level, or may be good pass blockers but struggle at the point of attack.  Lowe's videos show an offensive lineman who is good at all phases of the game.  He plays aggressively in the running game, hitting hard at the point of attack.  He is agile enough to be a pulling lead blocker, or to get to the next level.  He is very solid in pass blocking too.  He played tackle in high school, but it is not clear where he'll play at LSU.  I am convinced, however, that he is exactly the sort of lineman who is likely to have success at LSU, a good all-around lineman who is useful in all phases.

If you have not read Poseur's piece on putting together offensive line statistics, you should go ahead and read it.  We'll wait here while you do.  Done?  OK, he concluded that LSU fields a really good offensive line, based on balanced play, with solid run-blocking and solid pass-blocking.  Stavion Lowe seems to combine those elements.  He may need to re-shape his body, but he's a very solid 6'5" 295#, so the raw materials are there.

While Lowe is good in all phases, I am sure he will have to get better at everything he does in order to make it as a college lineman, but I am very encouraged by what I see.  Lowe was not a 5-star type guy, as he merited 4-star ratings on both Rivals and Scout, and while that's probably accurate, I think he's a 4-star calibre player who is among the most likely to amount to a very good player.

I am doubtful that any of the new offensive linemen from the 2009 class are going to break into the 2-deep unless there are substantial defections or injuries.  The 2008 class of Alex Hurst, Greg Shaw, Thomas Parsons, PJ Lonergan, and Matt Branch are all there along with veteran Will Blackwell to be backups to the starters, which will allow the class of 2009 the benefit of redshirting, which is what Miles and Studrawa like to do with their offensive linemen anyway.  I don't really expect to see Stavion Lowe or any other freshman offensive lineman play this season, but Lowe is a guy who is probably going to be able to break into that 2-deep sooner rather than later.