Share All sharing options for: Class of 2009: DE Michael Brockers 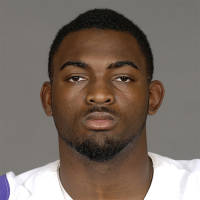 Defensive end Michael Brockers of Chavez High School in Houston, Texas, was one of the first commitments to the LSU class of 2009 and is a solid player.  Brockers is a player who was recruited as a hybrid offensive tackle/defensive end, but he is listed on LSU's roster as a defensive end.  It seems like a good move to me.

His film, limited though it is, shows him as a defensive end, well-built for the purpose at 6'6" and about 260#.  He is highly reminiscent of former Tiger defensive end Tyson Jackson, and with his size and strength that is probably the Tiger he should try to emulate.  In Brockers we see a player who, in high school, was appropriate the biggest and fastest guy on the field.  He has good tackling technique for a lineman, enveloping his target with his size while driving through him with his speed.  While he lacks the awe-inspiring quickness of a truly elite defensive end like 2010's Jackson Jeffcoat, he possesses the kind of athleticism that, if he continues to develop as a player, will make him a very valuable asset to the Tigers.

Brockers has been a very quiet member of the class.  With his early commitment and his steadfast not-willing-to-waver, there has been very little discussion of him.  He's almost a forgotten man among a very good defensive line class, of which he is the first to be profiled.  Also at defensive end will be Bennie Logan and Sam Montgomery, along with possibly Barkevious Mingo.  It will be tough to break through that class, and whoever does it will be an outstanding player.  There's nothing wrong with being the boring guy in the class though.