Share All sharing options for: Class of 2009: DE Bennie Logan 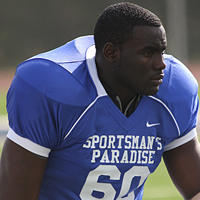 Defensive end Bennie Logan of Red River High School in Coushatta, Louisiana, was one of the last players offered a scholarship by LSU for the 2009 class.  He had a productive junior year, recording over 90 tackles, and while he did not earn an offer from LSU, the coaches decided to keep an eye on him.

Over the course of the next year, Logan matured physically and athletically.  Listed at 6'2 1/2" and 245# on Scout after his junior year, he is currently listed at 6'3" and 272# on LSUSports.net and as reported this morning, he may yet end up at tackle.  He had a terrific senior campaign at Red River, recording 116 tackles including 30 for a loss from his defensive end spot.

He was invited to visit the LSU campus and speak with the coaches and when they took a look at him, they saw a kid that no longer looked "borderline".  He looked like he was physically ready to suit up and play in Tiger Stadium.

I think Logan is a solid prospect, which probably makes me somewhat more optimistic than most about Logan's prospects of being a productive player.  He is listed as a 3-star on both Scout and Rivals, and who can blame them?  This is a kid who got little attention from BCS schools until after his senior year, but then his recruitment really picked up.  It's hard to say, though, that a kid is a 4-star prospect when his own home state school didn't pay much attention to him until late, and the rest of the regional powers didn't show any interest at all.  I think this is a product more of him being a very well-kept secret and a late bloomer rather, and is not because he is a suspect player.  I think he could be the Class of 2009's Jordan Jefferson, who also earned a scholarship late in the recruiting game, only to be probably the most valuable player we signed in 2008, at least in early returns.

Logan was not leftovers, though.  Michigan, Nebraska, and Texas Tech all wanted him before LSU offered.   I know that the coaches are expecting him to be a major contributor in the future, and he may end up being a contributor immediately, though my hope is that he will have a chance to redshirt and learn technique to go along with his physique before he is expected to contribute.

We'll get to Sam Montgomery later.

On film, Logan still looks a little raw.  He looks like the best athlete on the field, but probably still needs some coaching.  It's hard to argue with a man who makes over 100 tackles, with more than 1/4 of them behind the line of scrimmage.  My hope is that he can get that coaching and come back for the 2010 campaign as a redshirt freshman ready to fight for playing time against the likes of Chancey Aghayere, Chase Clement, and others from the 2008 class.