Share All sharing options for: Class of 2009: DT Chris Davenport 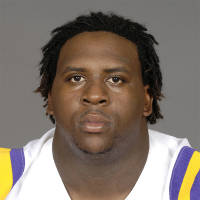 I so desperately wanted to make Chris Davenport a headliner, but I think ultimately I have to make him a solid player instead.  Davenport is a huge 6'4" 323# defensive tackle out of tiny Mansfield High School in Mansfield, Louisiana.  He was a 5-star on both Rivals and Scout, and he was a big pickup for the Tigers.  He's a very likable young man, and he was all-LSU from the beginning of his recruitment.

Davenport certainly has the tools.  He is huge, and strong, and has good quickness at his size.  He may not be a mountain like the one they have in Tuscaloosa, but he is at least a rolling hill.  Physically, he could end up being the perfect 4-3 defensive tackle, or perhaps a 3-4 nose tackle.

So why not give a 5-star his due?  I just have too many misgivings about it.  Davenport comes from a very small program; Mansfield is a 2A school.  It was not a very good team.  In Davenport's junior year, they were 6-5.  In his senior year they were 1-9.  He was playing in a not-very-good division and you just don't know how good the instruction around him was.  To add to the uncertainty, Davenport lost most of his senior year when he tore a meniscus.  He returned to action in time to participate in the U.S. Army All-America Game, but was not 100% healthy and was not really in proper shape, and therefore was not that effective.

I will say that the coaches reportedly love this kid, and think he is going to be a total stud.  He has gotten healthy and is in good game shape and ready to go.  He is reportedly a physical specimen, with as high an upside as we've seen in a defensive tackle since we signed Glenn Dorsey.  His videos show a raw talent, and he definitely has the upside of a 5-star.  You just have to wonder if maybe he needs more coaching before he's really ready to contribute.  I definitely think I'm taking a minority position.  He could well end up being an immediate contributor, especially in light of the fact that there is so little depth at defensive tackle right now.