Les Miles Is Reclined In the Warmest Seat In the SEC

Share All sharing options for: Les Miles Is Reclined In the Warmest Seat In the SEC 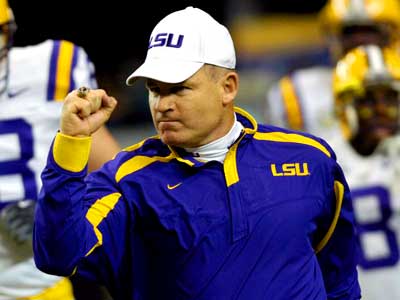 Like it or not, Tiger fans, this is a make or break year for Les Miles.

The caption above says, "Like it or not," because honestly, I don't like it.  I like Les Miles.  I think he's been a fine coach.  He has not been mistake-free by any means, but he has been a good coach for us, and I think he is a decent man who loves his players and whose players love him.  Why else would so many juniors looking at a huge payday in the NFL return for their senior seasons?  Laron Landry, Glenn Dorsey, Early Doucet, Ciron Black, Brandon Lafell, Charles Scott and others returned for senior seasons when the NFL would have made them wealthy.  That speaks volumes about a coach.  Winning a national championship doesn't hurt either.

But this is big-time college football, and he's getting paid well north of $3 million per year, and it's not to win 3 SEC games a season.  Last year was a profoundly disappointing year for LSU, winning only 3 conference games, losing a couple of big games late, and surviving a scare against Troy by the skin of our teeth.

There is not a coach in the SEC who is more than two consecutive profoundly disappointing seasons away from putting his job at serious risk.  Les has had one.

The title of this article is not, "Les Miles Will Be Fired After the 2009 Season".  I don't believe Les Miles will.  I believe his seat is the hottest in the SEC at the moment, but that the SEC appears at first blush to be in a relatively stable cycle at the moment.  Urban Meyer and Nick Saban are likened as to golden calfs at their respective institutions.  Mark Richt, despite bizarre claims to the contrary, is trucking along nicely at Georgia.  It would take a monumental collapse for South Carolina to want to ditch Spurrier, and he would quit first.  Houston Nutt is the toast of Oxford, and Bobby Petrino had a sufficiently promising opening season not to have to worry about this one too much.  Bobby Johnson is coming off Vandy's best season in a generation, and Rich Brooks is doing a lot better now than when they refused to fire him a few years ago.

Add in three brand new coaches, all of whom appear to have job security at least through year one, and that leaves championship-winning Les Miles as the coach most in need of a good season, and for more reasons than one.  Rightly or wrongly, Les Miles also has to face the spectre of the barrage of taunts of "winning with Nick Saban's recruits."  This is the first year in which players from pre-2005 recruiting classes will not make up a substantial part of the starting lineup, and while I think it's a stupid criticism (no one said Urban Meyer won in 2006 with Ron Zook's recruits, or that Nick Saban won the SEC in 2001 with Gerry Dinardo's recruits), until he has a good season from this point forward he will have no choice but to endure it.

The good news for Les Miles is that I highly doubt we are in for another 3-5 season.  Poseur rightly points out our mediocre special teams play last year, but we all know the two reasons we stunk it up in 2008:  problems at quarterback, and problems stopping other quarterbacks.  It looks like we've made great strides in correcting both of those problems.  Jordan Jefferson made huge strides between the loss to Arkansas in his first start and the win against Georgia Tech in his second, and has gone through his first Spring with the team, where we can justifiably expect more development.  He has not been perfect in practice, but we expect him to be a solid quarterback this year.

In addition, the hiring of John Chavis, Brick Haley, and Ron Cooper, and the reshuffling in the secondary has given us every reason to expect the epic disaster of last year's pass defense to experience a significant uptick.

Now we don't know how much better the QBs will be or how much better the pass defense will be, but we are quite justified in expect them to be at least a little better.  "A little better" in both of those categories last year would have probably given us a 9-win regular season in 2008.  "A lot better" in both of those categories would have put us in the SEC Championship game with a shot at going to the BCSNCG again.

But make no mistake about it.  If we see a repeat of last year, there will be many calls for Les Miles to be fired.  He may not actually be fired, but it would be a Charlie-Weis-like situation where everyone knows the Sword of Damocles is beginning its downswing and only a miracle rescue would stave off its descent.

I don't expect it, and I certainly don't relish it, but that's the life Les Miles has chosen.  If he did not want to forever be no more than 2 seasons away from looking for a new job, he could have stayed in the business world, where he was before he called Bo Schembechler and got back into football.  I like him, and I think he's good for LSU, but that's the way life is at this level.