Share All sharing options for: Class of 2009: DB Craig Loston 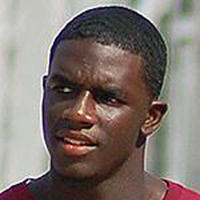 Safety Craig Loston is probably the best defensive prospect in a class that has a lot of really good defensive prospects.  He is a clear, unabashed, unambiguous headliner of this class.  He is a safety who combines top shelf athleticism with head-hunting attitude.  This is a young man who picked up a 15 yard late-hit penalty in an All-Star game.  That alone is not all that special, but the fact that he picked up that penalty hitting his own cousin and future LSU teammate Russell Shepard is special.

If you want to compare him to our most recent previous all-world safety recruit, Chad Jones from the class of 2007, there are some key differences.  Loston is not quite as big as Jones, and he will never see a playing weight quite like 230# like Jones'.  Loston is 6'2' and is listed at 193#, and I imagine his peak size will be in the neighborhood of 210#.  He is not quite the freakish athlete that Chad Jones is, though I think Loston is more of a pure safety than Jones, and he's plenty athletic in his own right.  It's just that Chad Jones is may well be the best pure athlete that has ever attended LSU.

I think, though, that Loston actually has a higher ceiling than Jones has.  Loston is also comparable to Laron Landry, because Loston has that hit-'em-hard attitude that Landry brought to the position.  He will also bring excellent ball skills, which Landry did not really have.  Loston will go up into the air and get that interception.  In this respect, Loston may actually combine the best attributes of those two outstanding safeties, Landry and Jones.

Craig Loston may then have the highest upside of any safety to play at LSU in recent memory.

There's just one catch.  Actually, two.  The first catch is that Craig Loston is not yet academically cleared to attend LSU.  He has been taking correspondence courses since January, and recently made a good score on the ACT, but reportedly it was so much better than his previous score that may be flagged by the Clearinghouse as suspect.  Word from Les Miles was that we will know more about Craig Loston's eligibility status around the start of classes, which I believe is August 24.  We do not, at this time, know for certain that Loston will be able to enroll in classes at all this season.

The second hitch is an injury situation.  Sonny Shipp at TigerSportsDigest recently reported that Craig Loston has a wrist injury that will require surgery and a significant rehab time that cannot be rushed, and the surgery can only be performed after he enrolls at LSU (I assume this is so that the Athletic Department can choose the surgeon and pay for the procedure).  So, he will get a very late start on reporting to practice, and then he'll have a substantial rehabilitation time of several weeks.  I think this means that a redshirt is very likely, as the special teams will have jelled without him.

Don't be surprised if they find a role for him late in the season if he is able to enroll though.  He is just that good.