Share All sharing options for: Class of 2009: RB Michael Ford 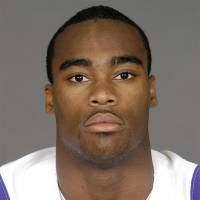 Our collection of posts on the Class of 2009 is coming to a close pretty soon.  Leesville running back Michael Ford is the penultimate prospect we will be examining.  He is the next headliner on the list.  Ford was a 5-star running back on Scout, and a 4-star on Rivals.  He's an all-around back, able to run with power and with speed.

Michael Ford is an extremely hard worker.  He comes to college with a workout regimen that is well ahead of his peers, and it shows.  He comes to school body-ready to contribute immediately. His high school workout regimen is something of legend.  His highlight videos have gotten him attention since he was a sophomore.

Ford came out of Louisiana in a year with a fair number of very well regarded running backs in or near the area.  LSU turned Eddie Lacy away, declining to seriously recruit him for reasons that are still somewhat murky.  Consensus 5-star running Christine Michael reportedly desperately wanted to come to LSU, but Les Miles did not show interest.  LSU wanted Michael Ford and Trent Richardson, who ended up signing with Bama.

Running back is a strange position, because it seems like the ideal height for a running back is about 5'9".  The low center of gravity seems to allow for quicker cutting and the delivery of compact power.  Some of the best running backs ever have been small: Emmitt Smith and Barry Sanders.  Michael Ford is a little bit bigger than those guys, or at least he's listed a little bigger at 5'10" and 207#.  He is probably a little smaller than that.

Now that Fall Practice has started, the word is that the coaches think the world of Michael Ford.  The words "Herschel" and "Bo" have been thrown around.  While that is certainly premature, and probably is an unreasonable expectation, it says a lot that Michael Ford is expected to contribute immediate in a backfield that includes some very good experienced backs, led by Charles Scott but also including Keiland Williams, Richard Murphy, Trindon Holliday, and Stevan Ridley, all of whom have been significant contributors in the past.

Michael Ford will not overtake Charles Scott in the rotation, but it wouldn't shock me if he overtakes everyone else.  His incredible conditioning (for a freshman), his intelligence, and his outright athleticism make him a good bet to contribute early, even at a position where there is plenty of depth.

This is a highlight reel from a post-season all-star game in Hawaii, and contains all of his touches in the game.  It's pretty impressive.